Lots of restaurant reviews to catch up on after the long holiday weekend. To that end, here lies your Week in Reviews. 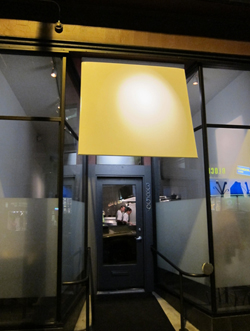 Josh Sens of San Francisco magazine drops a rare four star review on Oakland's Commis: "The dining room is quiet, monochrome and monastic, offering little to distract from the pleasures of a meal whose price ($68, plus $42 for a flight of well-matched pours) is a pittance in a market that can command that much for a pizza and a few glasses of wine...Any restaurant can fill you up. Only a rare few leave you this fulfilled." [San Francisco]

Bauer is at the mall, discovering "some of the best Neapolitan pizza in the Bay Area" at Cupola. "This is the place for serious cooking, focused on the huge freestanding wood-fired oven...when you're in Cupola, concentrating on the seductively charred and puffy pizza and pristine salads, you almost feel as if you've stumbled upon the soul of Italy." 2.5 stars

The Habitual Kauff tries out Stefano, a Bernal Heights Italian restaurant that recently added Guatemalan and Salvadoran fare to the menu under its new owners. Still he finds most people order pasta here, and there's only one thing he's come back for: "While Stefano's Guatemalan dishes aren't quite as compelling as the food at the nearby San Miguel Restaurant, the chicken pepian ($9.99) it serves on the weekends is a dish worth centering a Sunday-night ritual around...The pepian was earthy and nutty, broadly flavored but subtle, and even after I had eaten my fill of meat, I pulled off swatches of thick, just-made tortillas to dredge through the sauce." [SF Weekly]

Bauer has a measly 1.5 stars for Plant Cafe Organic on the Embarcadero. "Since my original review, the owners have expanded the dinner menu, but if my return visit is any indication, not with much success. It's muddled the vision even further - earthy crunchy without the virtue."

THE ELSEWHERE: The Chron has 2.5 stars for West Portal's Roti Indian Bistro, EBX says "entrees ranged from forgettable to bad" at Berkeley's 25-year-old Lalime's, Marin IJ works through the white board menu at San Rafael's Eduardo's, and The Merc likes the sushi at Brentwood's Mikado.

The door to Commis. [Photo: endoedibles]

For His Next Move, an Acclaimed SF Chef Takes Retirement Home Dining to a Luxury Level