Share All sharing options for: People Steal the Potpourri from Lafitte's Bathroom

Shit People Steal is Eater's ongoing feature about the items in restaurants that have been (or are frequently) stolen. 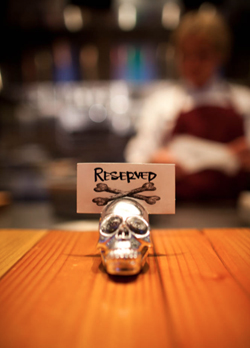 Chef Russell Jackson's people write in with some words about the things at Lafitte that turn innocent diners into crooks:

"People gravitate towards taking the skull ornaments from the table, but it’s the bathroom that gets the most ransacked, everything from light bulbs, toilet paper – to potpourri! Russell has a display case with a few pictures and memorabilia in the restroom, and he has had to put a lock on in it (twice!) as people kept stealing things."

Shit People Steal lesson #9: You're behind closed doors in the bathroom, but that doesn't mean it's a virtual freebie mart. Keep the potpourri out of your pockets, people. Just because it smells good, doesn't mean you can have it.

What do shameless diners or passers-by run off with from your restaurant? Email us here with your submission to Shit People Steal.