Beast and The Hare's Ian Marks and Dylan Denicke

Share All sharing options for: Beast and The Hare's Ian Marks and Dylan Denicke 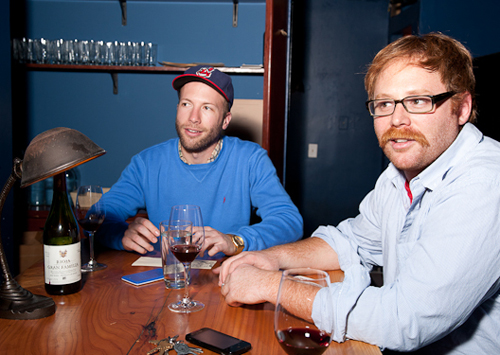 Beast and the Hare is the year-old meaty Mission restaurant from Dylan Denicke and chef Ian Marks. The duo, both born and raised in San Francisco, met during prior jobs at Hog Island Oyster Company, where the idea for Beast and the Hare was born. This being their first restaurant project and all, Dylan and Ian have impressively attracted a large, loyal crowd of neighborhood regulars, and Marks was even dubbed "animal expert" by one Patricia Unterman. We recently sat down with them to talk about year one at Beast and the Hare, and the road ahead.

Has Beast and the Hare turned out how you guys thought it would?

Ian Marks: I guess there's an evolution to what you originally decide on and then what really works. It's like this play land in your head, and then when you put it out there it's always different. For me, I thought it did eventually come to where we want it to be. We're a restaurant that people come back to all the time, and that's what I wanted, so yeah, it did.

When did most of the early changes in the concept happen?

Dylan Denicke: I had this theory in my head about how it was all going to be, and then as you watch yourself move through it, you realize what's not working and the concept evolves. We call it a hyper-evolution because it's so fast. You have to respond to feedback super-fast. So it's half that, and half what our original vision was two years ago.

You guys were both at Hog Island before, so I think some people were surprised that your next concept was something so meaty. Where did it come from?

IM: I started working at a French-American spot, Liberty Cafe. After that I went to work for Taylor [Boetticher] at Fatted Calf, to learn charcuterie. Then I learned seafood. And then I thought the next transition would be Italian, and then Spanish. But I got to a point at Hog Island where I was spoiled, and I could do whatever I want. So I kind of fulfilled all my wants and needs there, doing French, and Italian, but I couldn't do meat the way I want to do meat. You know, I'm a meat-eating guy. It wasn't a shocker for me, or anyone that knows me. I guess from the outside it's surprising. We're definitely not fisherman.

DD: When I worked at Hog Island, Ian would do staff meal and he'd often try a meat dish. He had a birthday party in the park and he roasted a pig. It was amazing, I loved it. I was like, this guy is into meat, I like meat too. Hog Island was all about seafood, so...

So tell me about the first month of being open to the public.

DD: It was wild because, we're both from here, and our families are from here, so it was like a big party in the beginning, you know, friends and family coming in. It took us a year and half to get open, so the first month was kind of like a crazy scene where everyone was trying it out. Nobody waited six months to come in because we didn't really know what we were doing. It really helped us.

Did you get a lot of feedback?

IM: No. They were just so excited. I get most of my feedback from Yelp, unfortunately.

Really. How often do you read Yelp?

IM: I read every Yelp. I email the bad ones.

IM: He can't read it. I have to. I find it helpful. I found out what's not going right. What's too salty, what's overcooked. I call people out a lot on Yelp. There was this one Yelp where this guy was like, "If you want thick-rimmed glasses and flannel shirts sitting around eating dinner, and tattooed servers serving you food, then go to the Beast and the Hare." I was like whoa! It's not ok for you to rip on servers and people that come to my restaurant. The guy actually wrote back to me that he got it. It was a funny way for him to come to the realization. He apologized, said "I'm a business owner, I get it."

DD: About 5% of the Yelp is good, and good to know. The rest is self-indulging for sure.

Looking back, were there any aha moments?

Didn't you say OpenTable was really helpful too?

IM: Yeah, it was incredible. Right out of the gate. We switched over and the second we did, we got a reservations.

DD: That was another eye opener. We didn't want to do it for petty reasons, and also because it wasn't the original plan.

Did you guys write a business plan?

DD: Yeah [laughing], I forgot about that. It was like, two staff, 4,500 net sales on a slow night. Two wood ovens, we were thought we'd get half a million dollars in investments, it was so crazy.

It's good to dream big. A lot of people mention that they have to lower their original expectations.

DD: Oh remember when Claudio came in? He's this amazing Italian gentleman who used to come into Hog Island very often. He'd always order an IPA and Ian's special. He never looked at the menu. He would walk from his house in Seacliff all the way to the Ferry Building in a nice suit.

IM: So he came in here and he was like, not that impressed. He looked at me and he said, "It's not very good." And I was like, ok what do I need to work on. He said work on your pasta, work on this. And it was raining that night, and he was like, "You're cash only? I guess I'm going to go walk to the ATM now." That's when I knew we needed to accept credit cards.

DD: Tell her what happened next.

IM: Oh, so he took six months and he finally came back and he sat at the bar, and I made those fried arancini balls, and he said, "It's just like Italy." And I made this bucatini, and he said it was how his mother made it. And I knew I had done it.

Tell me about the review process. Did you know when critics were in?

IM: For the most part no.

DD: Bauer was in, we identified him right off the bat. The other critics, only a couple bloggers were pointed out to us. I don't think we identified anyone else.

IM: I worked for Patty Unterman around 2000. It was a great review, but I don't think she remembers I worked for her, which is awesome. Yeah, the reviews were great. They were all kind of motivating because they were like, for the most part he's good. I knew I had to get that "for the most part" out of there.

So it helped you work on things.

IM: I came to the realization that it was a little too meaty. Like you can be meaty in a good way. That whole T-bone steak thing, I realized I needed to be a little more intelligent about the way I present food. So, there was an evolution in my thinking after the reviews. And because I was only working with seafood before, it took me time to figure it out. Working with different cooks really helped too.

Looking back, what would you have done differently? Besides the reservations thing.

DD: In general, I think you get carried away with an idea, rather than, asking is this economical? Is this going to work? Now, we're super pragmatic about things, as opposed to the conceptual phase. Ironically if we were that way in the beginning, the restaurant never would have gotten open. People with experience look for a space for ten years, because they've had a space they couldn't afford before. We brushed a lot of things aside because we were excited and it would've taken longer. In the future, we'd know to step back and handle things in a more mature way, but again, we wouldn't have a restaurant right now.

Have you been interacting with your landord [Luisa Hanson] a lot?

IM: Laughing. Yes. I just talked to her the other day. She helped us get in here.

DD: I feel like she likes us. She likes to tease us. It's as simple as that.

So tell me about the future. What are you excited about?

IM: I'm starting to do more charcuterie, and I want to start selling to restaurants, so anyone who wants to buy from me, can hit me up. I've talked about some things for Mission Cheese, and sold some things to Wise Sons. I do a Kosher salami for them. And then, I just randomly was like "Hey Locanda, want to buy some salami?" It's an Umbrian salami, it's really good, juniper berries, black peppercorns. We haven't sold to anyone yet, but we're talking about it.

DD: That's an example of the menu evolving based on customer feedback. People really respond to the charcuterie.

IM: The other night, I was asking myself, how do I not get bored? Because I get bored really easily. Maybe if I make more charcuterie and sell it to other people.

So what's your favorite thing on the menu right now?

IM: The mariner's rice. We're getting whole pigs now. I'm getting a 220 pounder on the 1st. I get it from Stone Valley Farms. He also sells to Kokkari. Awesome, awesome pigs. So I smoked ham hocks, took them and made a broth with crawfish heads. Then I took the tails and made a preserved lemon and crawfish butter. Then I make the rice, cook some black cod in it. The rice is hit with broth, and apistou and some morel mushrooms. It's a really good dish.

Any more restaurants on tap?

IM: Dylan has to hold me down. I think we'll do it eventually.

DD: It will basically be something without all of the things that stress us out unbelievably here.

So maybe something quick service?

IM: We talked about doing a charcuterie bar. Just a wine bar with house-cured meats hanging around everywhere. No staff. No hood. No $1500/month PGE. Just 12 seats.

DD: Grow into our old age.

IM: Our banter is purely a way for Dyl and I to have a mental vacation.

Beast and the Hare