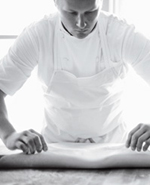 Food & Wine has called out nine "culinary icons" who "represent the past, present and future of American cooking," and three of them live in the Bay Area. Flour + Water's Thomas McNaughton leads the pack of 20-somethings for combining Old World and modern techniques, Thomas Keller represents the 60's "because he is the epitome of the ingenious, detail-obsessed chef," and among those 90 and older, Cecilia Chiang gets a shout: "Because in the 1960s, when chop suey was the norm, she gave many Americans their first taste of authentic Chinese food at the Mandarin restaurant in San Francisco." [Food & Wine]