As is the tradition at Eater, our closeout of the year is a survey of friends, industry types, bloggers, and readers to get a feel for the highlights and lowlights of the last year of eating in San Francisco. We've already covered Best Standbys and Top Newcomers. Now it's time for the Best Dining Neighborhood. Readers, please add your thoughts to the comments. 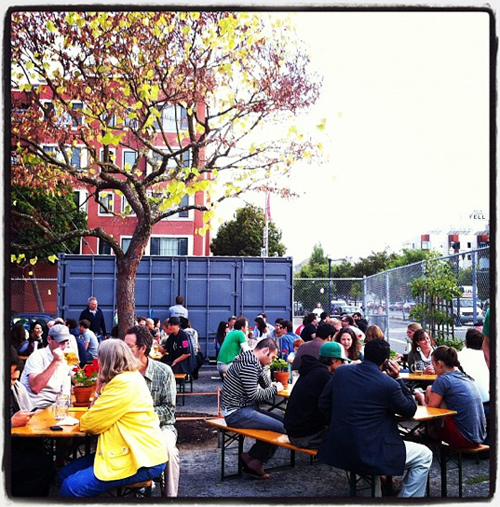 Suppenkuche's Biergarten in Hayes Valley, which has had quite a year in dining. [Photo: mdoeff]

Q: What was the best dining neighborhood SF in 2011?

Sara Deseran, senior editor 7x7: The Mission is kind of a duh, but I'm super excited to see Hayes Valley have some real life breathed into it. It's had a weird food feng shui up until now, but a lot of good restaurants are really grounding it.

Amy Sherman, Cooking with Amy: Probably the Mission, but downtown is gaining.

em>Stuart Schuffman, Broke-Ass Stuart: The best dining neighborhood has to be the Mission. I mean for fuck's sake a new restaurant opens every day it seems.

Virginia Miller, food and drink correspondent, SF Bay Guardian: Hayes Valley had quite a year. Stalwarts like Suppenkuche, Absinthe, Arlequin and Blue Bottle gained a range of neighbors, from playful Louisiana cuisine at Boxing Room and izakaya perfection at Nojo earlier in the year, to a recent slew of openings, like charming Two Sisters Bar and Books, peaceful tea respite, Taste, and French grocer (and cheese shop), Gourmet & More. Other newcomers include Dobbs Ferry, Biergarten, Seesaw, Smitten, etc... Hayes has evolved into a 'hood with a place to suit many a gustatory mood.

Jonathan Kauffman, restaurant critic, SF Weekly: The Mission. It tolerates the most experimentation, both in terms of format and cuisine.

Jane Goldman, Vice President and Editor-in-Chief, Chow: For me, it's the Mission vs. the Tenderloin/Tendernob. I'm going Tendernob!