THE MISSION - Luis Villavelazquez will be offering a modern Mexican New Years Day brunch at La Victoria with things like mini buñelos with cinnamon cajeta. Here's the a la carte menu. Hours are from 9:30 a.m. to 3 p.m., no reservations, and parties of up to 6 are permitted. Villavelazquez is also keeping up his Sunday Mexican dinners, which will resume on January 15th after a little holiday break. [EaterWire] 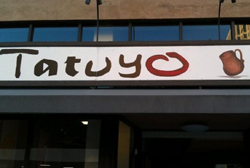 THE SHUTTER - Oakland's nascent 1015 Clay has tied up its year of drama by closing its doors for good. A taqueria called Tatuyo (pictured, right) is now up and running in its place. GrubStreet has a snapshot of the menu and some early Yelp reviews. [GrubStreet]

PRE-NYE - The Pizza Hacker is doing his thing at Vinyl tonight, and, in honor of NYE, the staff is pouring $7 glasses of bubbly to with his pizzas. They're calling it a "post christmahanukwanzaakah pre new years Pizza Party." [EaterWire]

THE SHUTTER EXTRA - Although some have been hopeful that The Rite Spot would reopen after its shutter by DOH late last month, Mission Mission reports that nobody should be holding his breath. ' People and musicians close to the establishment are skeptical it will be revived this time, with repair costs and real estate pressure being major factors." [Mission Mission]

SWITCHEROOS - It hasn't yet been two months in business for AQ and they've already done the seasonal decor switch, as promised. GrubStreet has a look at the new birch tree branches now hanging from the ceiling, et al. We're told tablecloths have also been switched out for winter white and the servers have been given a modern white tuxedo shirt, and will be sporting a black/white pants-shirt combo all season. [GrubStreet, EaterWire]

CURBED AWARDS - Our sister site Curbed SF has awarded the Proxy project "Best Building, 2011," pointing out its evolution out of "intransigent NIMBYism:" "In the 1960's, a plan to extend the the Central Freeway across the north side of Golden Gate Park (officially, The Panhandle Freeway) was stopped dead in its tracks by Sue Bierman and others...After a few more years of hot NIMBY debate, we have the Octavia Corridor you see today...But since no one can agree what should happen to the narrow empty lots on the east side...we have Envelope A+D's hard-edged but hip food court. Kudos to Douglas Burnham and Envelope A+D- and to everyone who made this happen." [Curbed SF]