Share All sharing options for: The Latest From Tonic/Bullitt Owners on Rebel and Their Bar & Restaurant Coming To The Mission


A few days ago news broke that Duncan Ley and Ben Bleiman of Tonic, Bullitt and the soon-to-open Rebel (more on that after the hop) have bought the Mission's Bissap Baobab from Marco Senghor. Bleiman tells Eater the concept will focus on a full bar and "delicious, fresh, very inexpensive food," but they are still going to take about three months to throw around several possible ideas and names, including the "Brass Monkey" moniker many have seen on the ABC poster on the door. Senghor fans should know he'll continue to operate Little Baobab and Bollyhood as per usual. 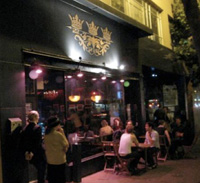 The first order of business for Bleiman and Ley is to get the revamped Triple Crown space open. As GrubStreet reported the new name will be Rebel and they're planning to open on February 28th with a soft launch of the Sneaky's BBQ menu. They want to keep the new interior a surprise until then, but did hint to a 1950s, Evel Knievel, "rebel-without-a-cause" feel. No confirmation yet on the stripper poles.