The Latest From Brenda's and Bar Tartine

Share All sharing options for: The Latest From Brenda's and Bar Tartine

For your Friday enjoyment, a status report on two works in progress: 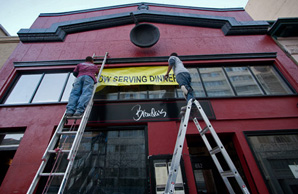 1) The Tenderloin: Although Brenda's is officially open for dinner in the new digs adjacent to the original space, the fully refurbished Brenda's 2.0 is "about 80% there," according to chef-owner Brenda Buenviaje. The original dining room and bathroom were gutted out last week and are being redone for a hopeful May re-opening. When both spaces are fully operational, the restaurant will seat 73 all together. In the meantime, you're welcome to pop in and enjoy the latest dinner menu, updated earlier this week. Bear in mind the liquor license is still on the way, although we hear there's an outside chance of tipple on site, in some cases. Specials like pork chops and BBQ ribs will be added on a daily basis. And the Tender has this nice tour of the construction as it stands. [EaterWire, Tenderblog]

2) The Mission: Checking in on chef Nick Balla's progress over at Bar Tartine, the menu is now about 30% his. He's putting peppers be brought back from Hungary into the chicken paprikas and house-smoking the king wild salmon for a gem lettuce salad with creme fraiche. Other notable items include a cabbage roll stuffed with duck leg, liver, sauerkraut, black trumpet mushrooms, smoked chili and dried cherries. According to a server on duty, folks are also raving about the pan-fried rock cod with asparagus, red frill mustard, baby shitakes and smoked broth. Balla says the menu will be 100% in May, around the time construction should begin on Chad Robertson's adjacent Eastern European-leaning bakery/sandwich shop. Then Bar Tartine as we know it will close for a brief period for some tweaks, and the whole shebang should be open with a new look and possible new name in June. [EaterWire]