What To Expect at Smitten, Liquid Nitrogen Ice Cream Shop

Share All sharing options for: What To Expect at Smitten, Liquid Nitrogen Ice Cream Shop

Checking in on the Hayes Valley Proxy build out, here's a look at the Smitten shipping container as it was lowered into the lot yesterday afternoon. Smitten owner Robyn Sue Goldman shared more on what to expect when her made-to-order liquid nitrogen ice cream shop opens in the coming weeks. "It's a new-age-meets-old-fashioned theme," says Goldman, who goes on to describe the four patented kelvin machines that will be whirling away on the counter as visitors enter the shop. All about transparency, the shop's street-facing wall is made of glass (as you can see in last week's rendering) and customers will witness the entire churning process as their scoop is made to order. Creating what legitimately sounds to be one of the purest commercial ice creams out there, Smitten uses just five or so ingredients in its mix: cream, milk, sugar, salt and "maybe a little egg yolk or butter, depending on the flavor." Because each scoop is churned to order, no stabilizers, emulsifiers or gums are needed. 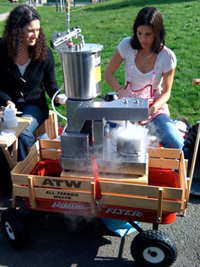 "It's definitely a different taste," adds Goldman, who's been fine-tuning the machines since she first launched in 2009 on this wagon here, primed for the San Francisco street. Special software has since been built into the machines so that the viscosity and ice crystal size is perfect every time. And although everything sounds so futuristic, Goldman wants the shop to feel "clean and warm," centered on the ice cream not the spectacle of the whirring stainless steel ice cream machines. Soft hemlock wood walls and Smitten's signature bright red have been worked into the interior to offset any coldness, per say. Most of the seating will be outdoors on red milk crates with cushions on them. As far as flavors go, expect salted caramel (enter the aforementioned butter), a fruit flavor (possibly strawberry depending on the markets), chocolate and vanilla along with Smitten's handmade pizzelle cones to be offered. Smitten chefs Robyn Lenzi and Andrew Shaw also create suggested topping pairings, like baked, spiced almonds for the salted caramel or freshly baked chocolate shortbread cookies for the vanilla. Smitten should start testing things out around the 14th with an official opening to come on the first day of spring: March 21.