More Restaurants Unite For Japan: From An Exquisite $300 Tasting Menu at Prospect to Cocktails at Ozumo

Share All sharing options for: More Restaurants Unite For Japan: From An Exquisite $300 Tasting Menu at Prospect to Cocktails at Ozumo

It's a beautiful thing. Over the past few days, the Eater Inbox has flooded with Bay Area restaurants' new efforts to help Japan recover from the devastating earthquake and tsunami that hit on March 11th. Here we break down who's doing what in addition to this, so you can partake. 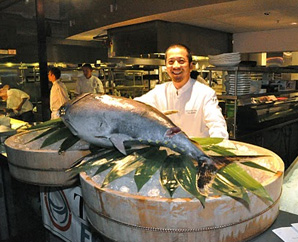 Two years ago, Sho Kamio of Yoshi's led some of the chefs listed above (Bruce Hill, Ravi Kapur, Paul Canales, Staffan Terje, Hiro Sone and Lissa Doumani) on an epic culinary journey to Sendai. To commemorate the trip and give back, the same group will join forces to create an elaborate reception and six-course dinner at Prospect restaurant on April 3rd. Tickets are $300 and 100% of proceeds will benefit farming communities in Tohoku. [EaterWire]

Next Thursday (3/31), the Mission's Nombe izakaya will donate all proceeds from its four-course sake pairing dinner to the Japan Disaster Relief fund. The dinner costs $45 and you can reserve your spot here. [EaterWire]

Through March, both locations of Ozumo will donate proceeds from its $8 Kibou No Hana cocktail to the American Red Cross. [EaterWire]

On April 5, all Patxi's pizza locations will donate 10% of proceeds to the Northern Japan Earthquake Relief Fund. [EaterWire]

Yoshi Tome of Sushi Ran has joined with the Northern California Japanese Restaurant Association to throw the Hope To Japan benefit at the Hotel Nikko's Nikko ballroom on April 5th. $150 tickets include food from over 30 restaurants, unlimited open bars and live music. [EaterWire]

Mayfield Bakery general manager Miyuki One Bear, who has family in Japan, created the impetus for Bacchus Management Group's Dine Out for Japan. Next Wednesday, March 30, Cafe Des Amis, Spruce, Pizza Antica, Village Pub and Mayfield Bakery and Cafe will donate a portion of their sales to the American Red Cross to help those affected in Japan. [EaterWire]

Sho Kami at Yoshi's. [Photo: Art and Entertain Me]