Not exactly one of the happier moments of the day, it's time for the shutter. Here, our roundup of the latest spots to duck out of the local restaurant world. 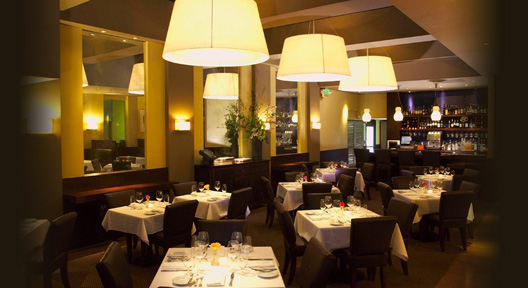 The dining room at Marché. [Photo: Marché website]
1) Menlo Park: Inside Scoop passes on the reminder that the esteemed Marché shuttered over the weekend after nine years in business. According to the restaurant's blog, the lease was up and they did not wish to renew it. Scoop also mentioned in an earlier post that the shutter has nothing to do with the economy. [ISSF]

2) Alameda: The Merc brings the story behind Golden Pin Donuts' closure over the weekend: "After 26 years of seven-day weeks and early mornings baking fresh apple fritters and twists, owner Rahim Seyedein is closing the coffee shop in order to spend more time with his wife and two children." The article points out Golden Pin started serving espresso in 1985 when Seyedein remembers "Most people had no idea what espresso was." [The Merc]

3) Bernal Heights: Maggie Mudd, purveyor of vegan ice cream, is closing its retail outpost on Cortland Ave. but will continue an online operation. The owner tells vegansaurus! he's "had some discussions with one vegan restaurant owner in the area about keeping the product flowing to the vegan community." Maybe his ice cream will pop up on the dessert menu at Cafe Gratitude or some other similarly minded organization. Guesses?[vegansaurus!]