Toast of the Town to City Hall, New Cocktail Menus Across Town, More

Share All sharing options for: Toast of the Town to City Hall, New Cocktail Menus Across Town, More

COMING ATTRACTIONS - Wine Enthusiast's annual Toast of the Town (TOTT) decided to make things a little more user-friendly this year and switched locations from the expansive SF Opera House to City Hall. In addition to 500 wine, spirits and beer purveyors on site, they just signed on the 36th restaurant, making this the biggest event to date. They've also added a Japan fund-raising booth with Global Giving and Shimizu-No-Mai sake tastings. Tickets here. [EaterWire]

ABC WIRE - Local Kitchen & Wine Merchant in SoMa, Brava For Women in the Arts, Outerlands in the Outer Sunset and No Worries vegan Filipino restaurant have newly acquired liquor licenses. Expect cocktail menus at all of the above in the next few weeks. [EaterWire, GrubStreet] 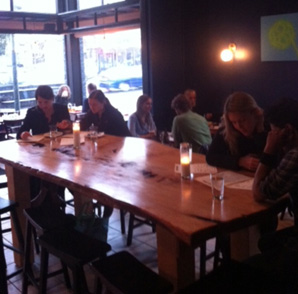 COMMUNAL TABLE WIRE - A week ago, Beast and the Hare finished up the work on its communal table (pictured) made from a huge slab of 127-year-old Cyprus from the Presidio. According to chef owner Ian Marks, it seats 12 and is handmade by two retired boat building family members named Chaz and Rebel. The scraps were made into new charcuterie boards. [EaterWire]

DELAY WIRE - Even though everyone said it would open Friday, it turns out Hyde Away Blues BBQ is actually not going to open for another few weeks! They will, however, be doing a freebie giveaway of some sort on Friday at 3 p.m. to make up for the miscommunication. [The Tender via GrubStreet]