Lahore Karahi, Saigon Sandwich in the 'Loin, Boudin at the Wharf

Share All sharing options for: Lahore Karahi, Saigon Sandwich in the 'Loin, Boudin at the Wharf

In addition to B³'s impending brief closure, a handful of local haunts are ducking out for a few weeks in March for a little nip, tuck, vacation or what have you. Here's what you need to know. 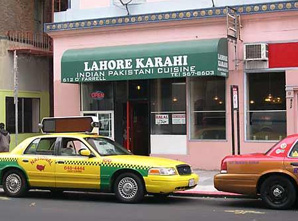 1) Tenderloin: Tenderblog passes on two short shutters in their neck of the woods. Larkin Street starlet Saigon Sandwich is remodeling now with plans to reopen on March 31. And the Wall Street Journal's favorite SF Indian spot Lahore Karahi is on vacation until March 24th. [Tenderblog]

2) South Beach: Remember Laird Boles' Spire announced it would close until Mid-March to remodel and rethink things. Now the tweets reveal that will be extended until the end of the month. [EaterWire, @SpireSF]

3) Fisherman's Wharf: The Taylor Street location of Boudin Bakery & Café is also undergoing a remodel and is slated to reopen on March 28. [EaterWire]