EAST BAY - The opening of lefty-leaning quick-service eatery Tender Greens has been pushed back a bit in Walnut Creek. They're "waiting on a couple of special order items to come in, but final inspection is around the corner." The new ETA is the end of next week. Here's a shot of the interior right now; well it's mostly a look at their eco light fixtures. [EaterWire]

NORTH BEACH - The Park Tavern opening is still gunning for August . Now they have a logo and the kitchen is almost done. [GrubStreet]

HAYES VALLEY Boxing Room, the forthcoming Cajun joint from the Absinthe team, should be opening up mid-May. Look out for a raw bar, a huge selection of tap beers and wines and Southern inflected desserts from Bill Corbet. Check out the rendering over on GrubStreet. [GrubStreet]

PACIFIC HEIGHTS - Asian specialty food store Dumplings & Buns is moving into the George pet store space across from Delfina Pizzeria. It will be designed by Jim Maxwell/Architects II who did Dosa on Fillmore; so it shall be a swank, sleek Asian food store at that. Expected opening is mid to late July. [Tablehopper]

POLK GULCH The Fina Estampa Peruvian and Spanish restaurant that closed in October of last year will resurface at Polk and Bush Streets. [Tablehopper] 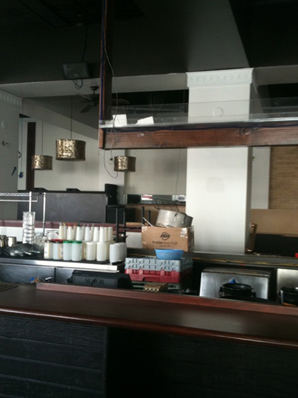 RUSSIAN HILL - Things appear to be moving forward at Rendezvous Tapas, the new concept to enter the revolving door at 2080 Van Ness. See the action shot of the interior at left, sneakily snapped by an Eater informant a few days ago. [EaterWire]

OAKLAND - The second outpost of Green Day bassist Mike Dirnt's Rudy's Can't Fail restaurant at 18th and Telegraph is "going gangbusters" as it gears up to open in mid-May. The new 120-seat restaurant is housed in the same building as the Fox Theater and it will have a full liquor license. [EBX]

OAKLAND EXTRA - Berlyn's Eatery should be opening Saturday in Oakland. The Feast has a look at some of the "healthy fast food" Dontaye Ball of Good Foods Catering has crafted for the menu. [The Feast]