Burger Truck Faceoff 2011: Doc's of the Bay vs. Fivetenburger

Share All sharing options for: Burger Truck Faceoff 2011: Doc's of the Bay vs. Fivetenburger

In the great tradition of January's BBQ Truck faceoff, we now bring you Burger Truck Faceoff 2011. We've heard numerous complaints about the lack of burger-wielding food trucks in San Francisco of late. And soon, where there were none, there shall be two—both of them flipping burgers to-order from an on-truck griddle. As Zak Silverman's Doc's of the Bay deals with its public hearings for two future Mission locations, we learn of new player Fivetenburger, suiting up for action. Both burger vehicles will be rolling up to Off the Grid's Civic Center edition for the next two Tuesdays. So consider it your fleeting chance to try the contenders side-by-side. Behold now, the vitals for each. 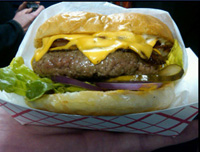 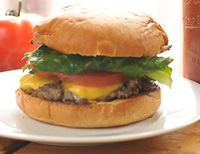 Off the Grid, Civic Center