Where To Find The Melt

Share All sharing options for: Where To Find The Melt 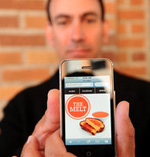 The Melt, that in-the-works grilled cheese empire owned by Flip Camera founder Jonathan Kaplan, will open its first location in the former Lee's Deli space (115 New Montgomery St.) in mid-to-late August. Remember Michael Mina is one of the company's directors and they've got technology to make a grilled cheese to-order in precisely one minute. After New Montgomery opens, expect four or five more local editions of The Melt to roll out in the Bay Area before 2012. Then there are just 495 more to go nationally. [EaterWire]