Outside Lands 2011: What the Bands Ate

Share All sharing options for: Outside Lands 2011: What the Bands Ate

And now, a special edition of Hangover Observations, wherein Eater reveals what the musicians ate during the weekend festivus that was Outside Lands. 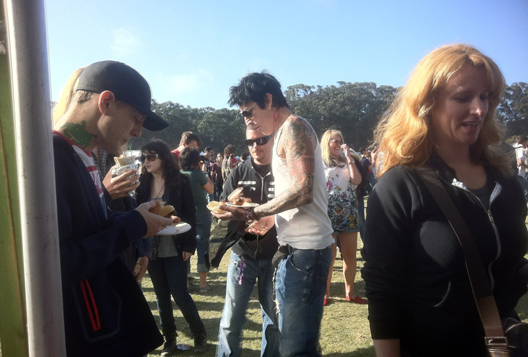 Deadmau5 and Tommy Lee eating filet mignon sliders from Point Richmond's Up & Under Pub and Grill.

As has become tradition, Outside Lands brought its annual full-on food and music binge to Golden Gate Park for the past three days. Things really started humming at happy hour on Friday and the pace stayed elevated into Sunday night, when the Philz Coffee and Spicy Pie stalls got hit hard as Arcade Fire wrapped things up on the Lands End stage in the Polo Field. While debates continue to circulate about whether the music lineup was better than last year, there's no arguing the food at OSL keeps getting better. At a press conference on Saturday, OK Go's Tim Nordwind reminded, "going on stage on an empty stomach is never a good thing." Since there were more food vendors than ever before this year, it wasn't much of a problem for all the performers to stay well fed. And we're not talking corn dogs and cracker jacks, here. After the hop, check out what the bands ate between sets: from filet mignon sliders to a gourmet take on rocky road.

1) Phish keyboardist Page McConnell enjoyed a coconut rice pudding from Loving Cup. He said he digs the business' name almost as much as their sweets.

4) Arcade Fire's personal assistant dropped by Pacific Catch "frantically" during their last set with the bands food requests list. An order of fish n' chips was sent out for horn player Colin Stetson.

5) Chris Funk of The Decemberists hit Namu for some Korean tacos.

5) Tommy Lee and Deadmau5 (pictured) were seen eating filet mignon sliders and bbq wings from Point Richmond's Up & Under Pub and Grill. Arann Harris and The Farm Band also picked up some sliders during downtime.

6) The NY-based "white boys" of Charles Bradley and the Manahan Street Band loved the burger from 4505 Meats. They noticed it was "like an In-N-Out burger but up a notch." They also snacked on chicken wings from Nombe and a chocolate covered Rice Krispie treat and rocky road cup from Sharona’s Chocolate Shop in Choco Lands.

7) Damian Kulash of OK Go, MGMT and The Decembrists all hit up the Flour + Water/Salumeria stall for one of their slow-roasted pork sandwiches. The Decemberists rounded it out with fried pickles from Those Fabulous Frickle Brothers.

Now do jot down other notable band sightings in the Comments section here. Or shoot a note to our ever-ready HQ.

· All Previous Outside Lands Coverage [~ ESF ~]