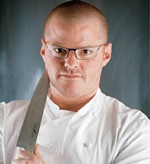 According to the Daily Mail, Michelin-starred British chef Heston Blumenthal has left his wife of 20 years for the American cookbook author Suzanne Pirret. An "award-winning voice-over artist," Pirret claims to have worked for Jamie Oliver as a pastry chef, has a cookbook entitled The Pleasure Is All Mine: Selfish Food for Modern Life , and once wrote or the London Evening Standard's ES Magazine: "Images of food and sex have become one long billboard of licking, sucking, dripping and drooling...Food and sex. Two of my favourite things, and the most powerful of all human drives. Best one after the other in either order, I'm not picky." Eater National has a video and more. [Daily Mail via -EN-]