Chris Cosentino and Michael Mina Add to the Shelf

Share All sharing options for: Chris Cosentino and Michael Mina Add to the Shelf 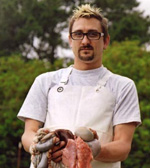 Local publisher Weldon Owen, in a joint venture with Williams-Sonoma announced the cute (or cringe-worthy) new culinary imprint Olive Press. The first title will be VOLT ink., the debut cookbook from brothers Bryan and Michael Voltaggio, due October 2011. Then comes the first cookbook from our own hyperactive yet far less sullen chef at Incanto and co-owner of Boccalone, Chris Cosentino. Seeing the Voltaggio brothers dine at Incanto a few months back suddenly makes a whole lot more sense. [EaterWire]

Publishers Weekly spills the news that Michael Mina's latest cookbook will have recipes (imagine that), stellar photography, and design concepts from the Michael Mina world of restaurants. It will be brought to you by Michael Sand at Little, Brown, by Jillian Manus of Manus & Associates Literary and Media Agency. [PW]