Share All sharing options for: Tee Off Bar & Grill

San Francisco lays claim to hundreds of bars, but only a tiny fraction of them get regular press. This column is about the other ones; the ones untouched by mixology madness and interior designers. Your guide is consummate festivarian, Eddy El Espia, who delves into the underbelly of our city's more anonymous watering holes, one by one. 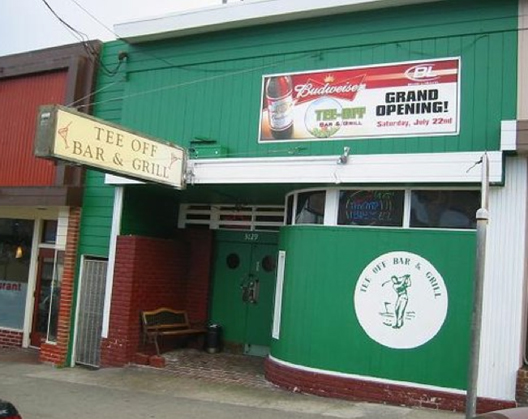 If you’ve just finished playing 18 holes at Lincoln Park, chances are you can only see out of one eye and you smell like John Daly’s golf bag. And while that makes you a wonderful human being in my eyes, it’s not likely that you’re ready to re-enter civilization just yet.

Just a block up from the course on Clement St. at 33rd, there’s a homey dive ready to serve you a hot meal and steady booze, all with a warm smile. They’ve seen your kind before. In fact, they are your kind. The Tee Off gives the feel of being in a vintage gameroom. It’s covered from floor to ceiling with sports and music memorabilia, bobble heads, trophies, jerseys, old boat props—all the lovable junk you’d expect to find in a dive. I’d been drinking at the bar for an hour or so, talking Giants baseball with the friendly neighborhood crowd and the bartenders—something you can expect to do on any given evening—when I first met the owner, Chef Paul.

We took whiskey shots, grabbed golf clubs and handfuls of cold beers, and headed into foggy and cold Lincoln Park for some heavy drinking and attempted golf. Not too bad for a Thursday. Paul is from San Jose, where he worked as a car mechanic instead of finishing high school. When I asked how he learned the bar and grill trade, he recalled twenty years of being a “floater.” He worked as a bouncer at JJ Blues in San Jose, cooked and tended bar at the likes of Kokkari, Paragon and Alioto's, bouncing around so he could learn to cook the different fares. Any other spare time was spent drinking at the revered Hearth on Geary.

Sometimes massive amounts of time spent at a bar can bear fruit. Maybe you hear some great stories, or you go home with someone special looking. In Paul’s case, his day came when a salty drunk walked in and declared the Tee Off was for sale. Paul folded all of his colorful experiences as a floater into the Tee Off—both in running it and in creating a unique menu for the kitchen. The staples include a generous pork chop served with a corn ear, mashed potatoes and grilled zucchini, all topped with a mango salsa. When served, it conjures memories of the steak John Candy ate in The Great Outdoors, but not in a gross way. In a, “this is fucking huge” way. A trip to Tee Off might also not be complete without trying the baked mac ‘n cheese, another comfort staple made with four different cheeses and served appropriately in a black skillet. But the menu is so diverse that it’s hard to choose, especially when you’re drunk the sounds of the "Bada Bing" (ground sausage burger), fish ‘n chips, grilled pizza or Kansas City-style ribs are all so very tempting. Wash it all down with a Lagunitas Lucky 13 or Poppy Jasper on tap, and say something nice to the wonderful bartenders Abby and Brooke. They're happy to have you there.