Possibly hungover from Heart Wine Bar's industry after party, following last night's documentary screening of “Wine From Here:Natural Wine In California," intrepid The Swill scribe Courtney Cochran writes in with some notes on the night that was. 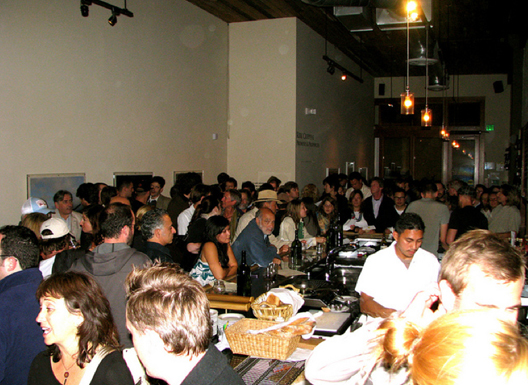 The Heart after-party event last night highlighted pours by seven of the film’s ten featured vintners: from The Sierra Foothill's Clos Saron to Sonoma's Dashe, along with a veritable who’s-who in the natural wine world. As the party finally thinned out around 11:30, it was clear that the natural wine movement has legs. What is a "natural" wine, per se? Well, as per several experts interviewed, the category includes wines made with a non-interventionst, non-additive approach. As I watched party-goers line up four- and sometimes six-deep at the bar to score pours like Coturri’s soulful Mendocino Carignane and Dashe Cellars’ electric dry Riesling from Potter Valley, the quiet natural wine movement’s momentum settled in. Battered by numerous elbows and shoves, any of my ruffled feathers were soothed by the graciousness and eager enthusiasm of the documentary’s featured vintners.

1) The proportion of beards in Heart was at an all-time high. The stylish scruff of Mission cool kids contrasted with the abundant beards of the most “natural” of vintners, creating a, ahem, hairy aesthetic in keeping with the evening’s theme. Natural, indeed.

2) One of those amply bearded vintners, Clos Saron’s Gideon Beinstock of the Sierra Foothills AVA, was quick to express his wonder at being part of a “movement.” Asked what makes today’s natural wine-making different from what occurred before we had pesticides and artificial additives, he leaned in earnestly and replied that we have “lost our innocence” and must begin afresh in repairing the earth; making wine naturally is just one part of the greater sustainable matrix. Big picture stuff.

3) Film director Martin Carel of Montreal, while clearly thrilled with the reception to the film and full house at Heart, rued that a tasting panel featured in the film was not able to identify the provenance of wines during a filmed blind tasting. He interprets this as a sign that California has a long way to go still in terms of establishing concrete terroir identities based on location. Hey, at least we’re underway.

4) Alice Feiring, New York’s natural wine authoress extraordinaire and lady o’ the fiery hair and acerbic tongue (her longtime Robert Parker rant famously expanded into a whole book – The Battle for Wine and Love: or How I Saved the World from Parkerization), shared her surprise in finding a roomful of California wines she can actually drink. Her dislike of overly made up wines (i.e. Parker darlings) thus assuaged, she delighted in the evening’s spoils and admitted she felt “self conscious” on seeing herself on the big screen for the first time. Alas, her informed commentary was hardly worth being embarrassed about.

5) Popular wine blogger and natural wine impresario Hardy Wallace was literally running out the door when I stopped him for details on his next moves. Having left the Natural Process Alliance (NPA) in July, this erstwhile winner of the much buzzed-about Murphy Goode’s Really Goode Job web contest is poised to launch his own label, Dirty & Rowdy.

6) Carel shared that the most marked criticism of his largely well received film is that he leaves the issue of money entirely out of it. With these pours coming in at higher prices due to their costly inputs and processes, it’s a viable complaint. When I asked if he had a favorite pour of the evening, Carel raved about what was in his glass at the moment, a Salinia/Natural Proces Alliance “WE Bottoms” Pinot Noir from the Sonoma Coast. At $15 a glass it had better be precious. He was quick to add that these vintners are more interested in their craft and process than in making money. How consumers and their pocketbooks reconcile with this reality remains to be seen.

7) When he wasn’t buzzing about feverishly to accommodate the crowds, Heart owner Jeff Segal shared his affection for natural wines. He says he gravitates towards the purity of natural wines, though he is not overly intentional about seeking them out. Will he continue to feature California versions like those poured last night? “My focus here is on Old World wines, French and Italian specifically, but I find these wines really interesting and dynamic. I’m happy to pour this lineup tonight and happy to bring in some of these from time to time.”

8) Notoriously critical Feiring summarized her thoughts on the evening with this quip: “I never dreamed two years ago that I would spend an entire night drinking California wine.” It seems we are onto something new - a more balanced and authentic type of vinous quaff. Cheers to that.
**
Also available last night, quaffs from Coturri Wines, Clos Saron, Old World Winery, Edmunds St John, Dashe Cellars and La Clarine Farm.