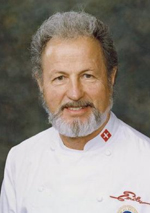 Award-winning chef Emile Mooser, former chef-founder of Emile's Restaurant in San Jose, was sentenced to 10 months in jail for spending nearly $400 for access to child pornography websites. Remember late last year, Mooser pleaded "no contest" on the charges, so you knew this was coming. To no avail, many of Mooser's supporters wrote in to the judge, citing his history of community service as grounds to shorten his sentence. Meanwhile, Emile's is humming along in San Jose under different ownership. [The Merc]