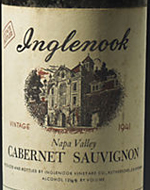 Later this month, Christie’s auction house in New York will present a special selection of "legendary" bottles from the private cellar of Francis Ford Coppola, including two bottles of 1941 vintage Cabernet Sauvignon, value estimated at $8,000 to $12,000. The press release notes these are considered "among the greatest red wines ever made.” See the full list of Coppola bottles to be auctioned off in this handy ecatalogue on Christie's website. [EaterWire]