Share All sharing options for: A Pizza, Beer and Wine Pairing Adventure

Hot off the presses, here's the next edition of The Swill wherein Hip Tastes book and blog author Courthen Cochran brings us the latest from her wild world of wine (and beer). 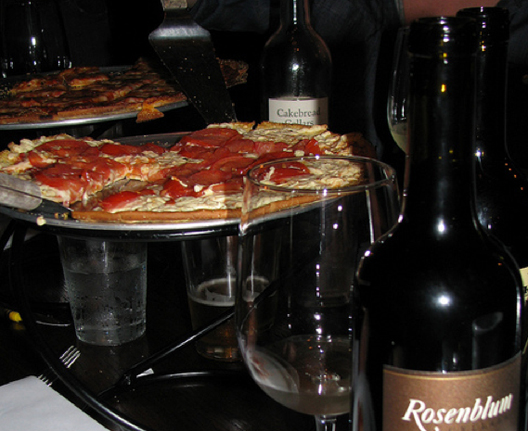 In the company of various curious journalists, I gathered at Patxi's Noe Valley branch to uncover the ins and outs of pairing wine and beer with pizza. The advantage at Patxi's, of course, is that the joint has all manner of pies. Some are deep of dish, a few are super thin, and some inexplicably sport vegan "cheese." BTW, props to the vegans at Daiya for a surprisingly believable "cheese" experience. I went home overfed yet again—Carolyn: you’re going to start paying my gym membership!—and somewhat wiser where this subject's concerned.

1) Vegan deep dish pizza with garlic, red onions, mushrooms and Daiya vegan "cheese"
Best Pairing: Bud Light
I am secretly a cheap date. Just as I swooned for the McD’s cheeseburger during my infamous burger-booze bender, I found the super light, lemony rinse of a Bud Light just the thing for this incredibly wrought pie. For the uninitiated, a Patxi’s deep dish crust stands a good two inches tall. This mammoth bread bomb combines with garlic-laced veggies for a full-throttle gustatory blow, rendering anything but the most banal pour outlandish.

2) Extra-thin cheese-to-the-edge pizza with sauce and mozzarella
Best Pairing: 2007 Rosenblum Cellars Paso Robles Zinfandel
Rules of thumb with wine consumption can be boring, but just as often they’re right on. Take the old tale of Zinfandel as the ultimate pizza wine. It just works in most cases. It sure did with this thin crust pie, possessing a delicious (real!) cheese overlay, toasted just-so from a quick lick of the flames. The slightly sweet call of the red sauce was answered by jammy Zin’s sappy red fruit and just a hint of toast and baking spice from oak-aging to lend a bit of verve.

3) Spanish chorizo and coppa-stuffed deep dish pizza
Best Pairing: 2009 Sawbuck California Cabernet Sauvignon
Man oh man, sometimes I can’t believe how people eat. Take this artery-clogging proposition. So incredibly rich that to take more than two bites was to risk waking up in a pool of grease my body purged for its own good. Still, two bites was enough to know that this meaty pie is destined for a Cab, especially one with enough brisk acidity to mete it out (heh) with the crazy fat-carb content here. Carrying a reasonable 13.9% alcohol, this new pour is one I’d put in my artillery again for such a meal.

4) Deep-dish vegan with red peppers, green olives and artichoke hearts
Best Pairing: Hoegaarden on draft
Our informal yet intrepid tasting team discovered that adding pepper flakes to pies enables you to switch pairings. This more basic pizza, for example, turned a little electric when we spiked it with some heat, but more impressively, the heat made an alluring link with the wheaty, spicy Hoegaarden available on tap (Stella was a close second). There’s just something about beer’s crisp, cool sensation and the carbonation’s foil to the breadiness of a deep dish offering. This was hands-down my favorite pairing of the day and secured beer’s place in my heart as the pairing wunderkind where pizza's concerned.

Final Words: What didn’t work, you may ask? We tried a Pinot that was so caramel-laced, oaky and high in pH that it was out of the pairing question entirely. I dind’t try the IPAs and Hefeweizens on hand because I felt they would be too bitter (hoppy IPA) and low in acid (Hefe) to work well. A Sauvignon Blanc from Cakebread was delicious as always and worked tolerably with the thin crust cheese-to-the-edge number with Daiya and jalapeno. The green heat was ably answered by greenish-tasting Sauv Blanc, and I was enlivened by the lightness of both together.

Of course, pizza come in as many guises as you can imagine, and there are no real rules for pairing. Still, some general guidelines come in handy: 1) overwrought with overwrought probably isn’t going to please you; 2) acidity is a good thing when there’s ample grease involved; and 3) always say yes to a pizza that has cured meat shoved inside of it. Though I complain, I secretly relished the naughtiness.