Yesterday morning at Berkeley's Sproul Plaza, UC Berkeley student GOPers hosted the most discriminatory bake sale of the year, pricing cupcakes based on the customer's race. White boys paid $2, Asians $1.50, Latinos $1, and so on. Despite numerous threats against the bake sale organizers, an outraged Cal Berkeley student council, a media firestorm that attracted everyone from CNN to the NY Times, and a Poly Sci professor who offered to buy all the cupcake inventory at the beginning of the event, it went off without a hitch. For some of the weirder controversy highlights, including a simultaneous "die-in" opposing the bake sale, here's you Twitterverse recap.

At 9:45, fifteen minutes before the official start of the bake sale, you can almost sense the disappointment in Daily Cal's live blog: "The Berkeley College Republicans have begun to set up their table. Police and media outnumber other attendees at this point." 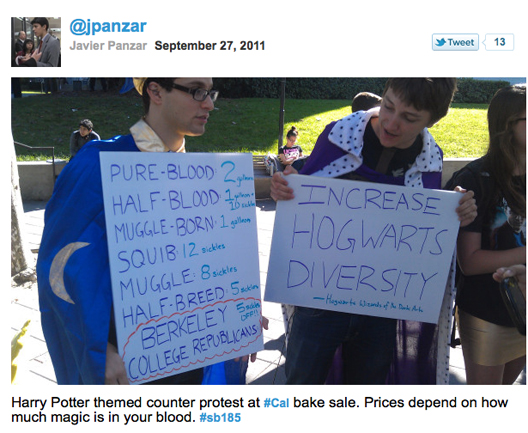 University of California at Berkeley S