It's Happening: Sonoma Winemaker Ben F. to be The Bachelor

Share All sharing options for: It's Happening: Sonoma Winemaker Ben F. to be The Bachelor 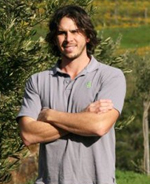 Of late there's been some speculation about Ben Flajnik, who you may or may not know as Ben F. from the soul-crushing last season of The Bachelorette. People are wondering if he'll subject himself to more drama as the next front man for The Bachelor, and NBC passes on word that it's true. "Tourism promoters are already working with the show's producers to suggest filming locations for next season...some small Sonoma Valley towns, the redwoods and of course, the coast." [NBC Bay Area]