To thoroughly enjoy this season of The Bachelor featuring Sonoma winemaker Ben Flajnik, we welcome Hip Tastes book and blog author Courtney Cochran, who will be here every week to guide you through the wine-splashed drama. 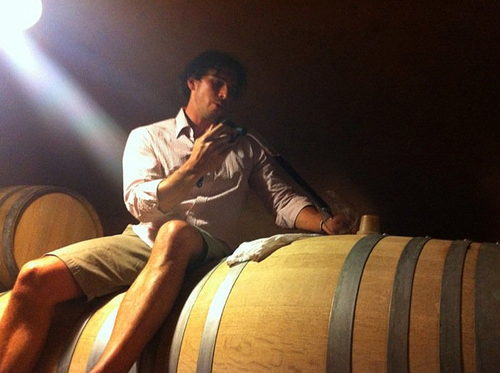 The 16th season of The Bachelor continues to unfold in all of its boozy $hitacularity. Predictably, the cat fights continue, though this episode—filmed entirely in Ben's home town of Sonoma—will go down as the one in which "VIP Cocktail Waitress" Blakeley (AKA Jugs, Fakeley) stole too much time with Ben (pronouncement: "Stage Five Clinger!"). Mean model Courtney also further wormed her way into Ben's heart (Ben: "I just hope she's not too good to be true!"- hmm, can you say foreshadowing?) and contestants dressed up as animals to put on a play written by sixth graders in the community theater (audition prompt: "make a pig noise!"). The star? Natch: Prince Pinot of Bachelorville, who is trying to find his princess. Good luck with that.

· Knocking back a huge sip of wine (a common move in the show's confessional scenes), model Courtney remarked on Blakely-gate, referring to the the ex-Hooters waitress who fled sobbing into a corner: "It's like a war out there." Courtney had another pearl of an observation when she noted "there's a lot of worry in the air...and it's thick," referring to the other contestants' pre-rose ceremony jitters. The Caesar's Palace model had already secured a rose on her one-on-one date with Ben, a jaunt into a Redwood grove where her bland personality—which only lights up when she has a dig to dish out—was upstaged by Ben's adorable dog, Scotch.

· Little needs to be said about the 12-woman theatrical play the contestants had to put on for their "group date," except that it seemed a plum opportunity for producers to underscore Ben's role as winemaker-cum-sex-object. That the script was supposedly written and directed by sixth graders poses some troubling questions about these kids' developing ideas of dating and sexuality, but that's someone else's problem now, right? Fortunately, the women were seen drinking just before going on stage, getting up the liquid courage to pad some of the humiliation they must have felt mimicking wildlife for a scrap of affection from His Royal Highness.

· Another one-on-one date saw Ben take southern sweetie Kacie B. to the Sonoma town square, where they ducked into the Ledson Hotel lounge for an impromptu piano lesson, visited a novelty store and had dinner at The Girl and the Fig. As for other Sonoma locations featured in the episode, the Press Dem tells us that "the ladies stayed in 'Vineyard Knoll,' a private villa in Glen Ellen owned by BeautifulPlaces. The villa sits atop vineyards with a dramatic pool, and a cluster of oak trees with enough room to host the rose ceremony." Quite an atmosphere for getting dumped!

· Speaking of the rose ceremony, we should all bow our heads in silence to observe the booting off of neurotic NY blogger Jenna, whose bizarre facial contortions, penchant for crying at the slightest provocation and mumbling of barely-coherent confessionals was worthy of some sort of reality TV award. When the camera cut to her reaction after she did not receive a rose, she managed to blurt out a few final choice words before descending into unintelligible sobs: "I feel sick...are you kidding me?" Nope.

· Though she might have felt queasy because she'd been drinking for...hours. The Twitterverse buzzed at the sight of a clock seen behind Jenna earlier in the night. As @melissagrelo put it: "It said 2:05 am on the clock. Let's see: 18 women + 1 man + lots o' booze + long day and night = guaranteed drama."