The Bachelor Episode 3: Bikini Skiing and Dinner at Bourbon & Branch

Share All sharing options for: The Bachelor Episode 3: Bikini Skiing and Dinner at Bourbon & Branch 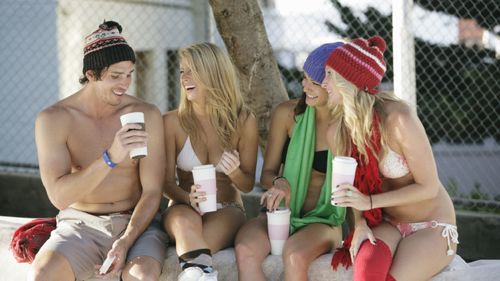 In spite of reported 85 degree temps and sunny skies over San Francisco during filming last fall, the mood was as stormy as ever on this week's episode of The Bachelor, which saw Ben squire a bevy of aspiring fiancées around his home city, "San Fran." Fans of boozy escapades will be sorry to hear there was less blackout-style drinking this time around, but what the ladies lacked in drunken sobs and fantastically unintelligible confessionals they made for up in WWF-caliber cattiness when an unannounced new contender for Ben's love showed up just before the rose ceremony.

· One-on-One #1 was a (blessedly sober) hike to the top of the Bay Bridge with PhD student Emily. Snarked @JasonKinney - "I'm not sure how much ABC paid CalTrans so #TheBachelorcould climb to top of Bay Bridge but I think we've found new State Budget solution".

One-on-One #2 swung through Swensen's ice cream parlor (They both got mocha chip.), Chinatown, then City Hall for a surprise after-hours concert by Matt Nathanson, who sang "Faster". When Ben opened the "locked" doors of City Hall with a special key, date Lindzi swooned "he's kind of amazing" (and apparently BFFs with Ed Lee). Last stop: Bourbon & Branch for dinner in a private room accessed through one of the book shelves.

* Next up was a group date, where a bare-chested Ben and 11 bikini-clad (natch) ladies skiied down an artificial snow-filled SF street, flanked by views of our fair city's most phallic landmark: Coit Tower. On the date card, Ben said he wanted to do something from his leap list, later sharing with the ladies: "I don't think anyone's ever [skiied] in San Fran!" ("San Fran"!, Again!) Guess he forgot about that time they did it for Jonny Mosely's 30th birthday. The segment ends with Ben's choice comment re: flexible first-time skiier Kacie B and her penchant for leading with her rear: "Butt skiing backwards is on my leap list!"

* The 11-woman group date wrapped up—where else?—at the Tonga Room, which was also recently featured on The Layover with Anthony Bourdain. The contender who arrived with her grandma in Episode 1 left the competition abruptly because her "heart [wasn't] in it." Or maybe she just missed her grandma. Ben barely skipped a beat, making time to canoodle with several other women in a random back area of the restaurant before the night was over. Where were the lava bowls?

* At the final cocktail party leading up to the rose ceremony, Ben squired mean model Courtney to the roof for some one-on-one time. The Bachelor, who still seems totally besotted with the leggy brunette balked at her remark that "we would make beautiful babies." "SOMEday" was his awkward reply. Down, girl!

* Shawntel-Gate: The reality TV Emmy should go to the last 20 or so minutes of the episode when funeral undertaker Shawntel struts in wearing sky-high gold heels and a skin-tight red dress. Shawntel, who famously shared a home town date with previous Bachelor Brad Womack at her family's funeral home, crashed the rose ceremony in hopes of reigniting (igniting?) a supposed connection with Ben. When he saw her, all Ben could muster was ""Holy $*!?"

* The ladies, knocking back copious amounts of red wine, were far from tongue-tied, finding time to skewer the interloper for riding in "on her high hearse," being "Brad's dumpster trash" and—my personal favorite—having "thicker thighs than me." Another fair maiden dished the Episode's best dig, ”On a scale of 1-to-10, I think I’m gonna throw up.”

* In a $hitacular finale, one soon-to-be-rejectee nearly passed out under the pressure, another fled sobbing to the bathroom (a recurring theme in this series) and a shocked Shawntel did not receive a rose. Courtney, always ready with a snappy word or two, gave Ben the first glimpse of her catty personality when she said to him, upon accepting his rose, "I saw you talking to what's her butt. It was not easy." And there it was. The episode's second and final butt remark—keepin' it classy in San Francisco.