The Bachelor Episode 4: Awkward Bubbly Swigs and Rappelling into a Sinkhole

Share All sharing options for: The Bachelor Episode 4: Awkward Bubbly Swigs and Rappelling into a Sinkhole 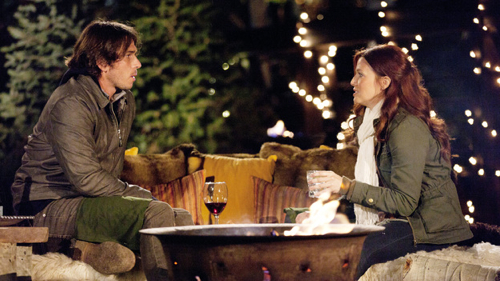 Season 16's bevy of hopeful fiancees is now down to 13, following last week's drama-fueled rose ceremony. Last night Ben F. and the ladies touched down in Park City for an activity lineup worthy of an L.L. Bean catalog (horseback riding, rapelling, fly fishing, etc.). Ben saw it as an opportunity to show the gals his "rougher," "country," side, but some women clearly saw it more as an opportunity for another round of all-out verbal warfare—in cocktail dresses, no less. With the final dramatic moments fueled by ample pours of red, white and a mystery golden-hued wine, we couldn't help but shudder at Park City's sad transformation into Park $hitty.

· Awkward "Romantic" Moment #1: Ben squired "retired" New York fashion sales rep Rachel on the week's first one-on-one date to a pond, where they canoed around before popping some bubbly on the shore. During one awkward moment when Ben later confessed that "the conversation was kind of lagging," they both took sizable swigs of their wine for consolation.

· Kissing A Fish: The week's group date was a Robert Redford-worthy romp on horseback to a fly fishing spot, where Ben announced to the gang: "we have to catch our lunch." It would have been a meager meal with just one fish caught on camera, snagged by lean, mean model Courtney. Delighted to have upstaged openly outdoorsy Lindzi, Courtney later sneered, "her head almost popped off and spun around!"

· Model Metaphors: Reluctantly, we have to give props to Courtney's choice array of fishing/mating metaphors. Of the date, she later boasted she thought it was time to "reel Ben in," reveled in how he "took the bait," and remarked - no doubt because it affirmed her appeal - that he's "a good catch." If Ben's a fish, Courtney's a shark.

· Blond Ambition: Abrasive blond, Samantha, was sent home early for being too pushy. Having noted in a confessional she felt she "should already have a ring on [her] finger," she put the heat on Ben for a one-on-one date. He couldn't have disagreed more.

· Awkward "Romantic" Moment #2: In one of the episode's more sluggish segments, Sir Ben invited cute red-headed Oklahoma accountant Jennifer on a one-on-one date in which they rappelled down a "crater" (sink hole) to a murky pool of water together. Jennifer was "petrified." On the upside, it was an excuse for viewers to see them both in their bathing suits—a regular feature on the show by now. Ben cued up another (trite?) remark about the importance of trust in relationships. Check and check.

· Cat Fight Amp Up: Things took a turn for the messy when PhD student Emily and Courtney went head to head with verbal barbs in the season's first true head to head combat, just prior to the rose ceremony (in keeping with all the best drama in this series). Emily compared Courtney to "a marble statue...beautiful [but] cold;" in response, the model threatened uncreatively to—what else?—"rip her head off." Just another day at the Park City mansion (AKA Canyons Resort). At the very least we know next week will bring more wine.