Share All sharing options for: People Steal Tequila Trophies From the 7x7 Awards

Here now the latest edition of Shit People Steal, in which we ask restaurateurs what items in their restaurant have been (or are frequently) stolen. 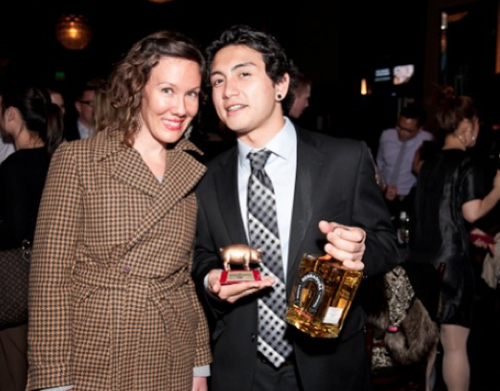 Chef Greg Dunmore of Nojo writes in with a keeper for the Shit People Steal archives. Remember his server Joel who accepted the 7x7 award for Best New Restaurant on Monday night? That shiny Herradura tequila bottle trophy was a goner soon after our photographer, Molly DeCoudreaux, snapped this shot. Dumore explains:

"Joel said he put it down right after this picture to talk to Jasmine (in the picture with him), finished the conversation then went to grab his bottle...poof, gone! who would steal someone's prize? i really don't believe this shit actually happens until it happens to us..."

See any incriminating evidence in the picture? Do write in. Or tell us about the shit people steal from your restaurant by emailing us here.