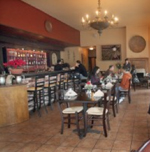 Almost as surprising as the closure of Citizen Cake at 2125 Fillmore St., is the next taker for the space: Troya, a Turkish restaurant whose original branch (349 Clement St) has flourished for several years now in the Inner Richmond. After a quick facelift to the interior, the new Troya will be more "modern and hipper" than the original, and hopefully more profitable than its predecessor was. FYIW, insider tipsters are saying the rent is below market, so they've got that going for them. [ISSF]