The Bachelor Episode 1: Oaky Chard and "Wine" From Table Grapes

Share All sharing options for: The Bachelor Episode 1: Oaky Chard and "Wine" From Table Grapes

To thoroughly enjoy this season of The Bachelor featuring Sonoma winemaker Ben Flajnik, we welcome Hip Tastes book and blog author Courtney Cochran, who will be here every week to guide you through the wine-splashed drama. 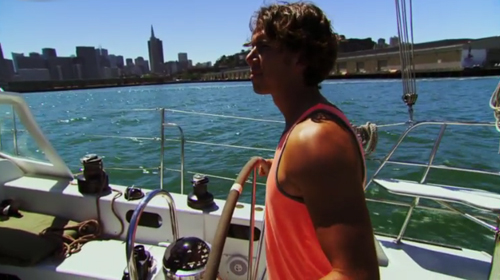 Last night saw the debut of the 16th season of ABC's "reality" $hitshow The Bachelor. Sonoma winemaker Ben Flajnik was dumped last year when he proposed to Bachelorette Ashley Hebert, and now's he's seeking redemption as the next Bachelor. Because Flajnik runs a winery called Envolve in Sonoma, there are going to be lots of highlights from wine country this season, and I'm going to give you my two cents on the best and worst wine-y aspects of each show. After the jump, vinous highlights from the first ep, including an out-of-the-gate blogger meltdown, a vino expert impersonator and making "wine" with table grapes.

* The first hint things would get sloppy was when all the ladies pulled up to the LA mansion and Bachelor/Bachelorette HQ already drinking in the limos. In what has to be the longest cocktail party of the season, Bachelor Ben had to find a choice moment or two with each of the 25 contestants and do a line dance jig in between. It looked like most women were drinking white wine, and we have to imagine it's an oaky California Chardonnay. Not the most sophisticated quaff around, but then again sophistication did not seem to be a strong suit for many of these contenders. (Choice quote: "I'm at a point in my life where...I'm a model.")

* One gal who described herself as an "actress" emerged from the limo and told Ben she is a wine expert and that he should ask her whatever he wanted about wine. When Ben asked her for her favorite varietal on a hot day she stopped short, looked totally flummoxed, and said actually she knows nothing about wine but likes to drink it. (You'd think she could have at least mentioned Chardonnay, which she'd probably just been gulping down on the ride over.) Verdict: Bad acting. Didn't get a rose.

* Another contender arrived last...on a horse. Her grand entrance was dismissed by many of her cohorts as over-the-top, but it seemed to work: the horsey gal won the First Impression Rose, scoring the evening's biggest honor in spite of her announcement to Ben that she tried to make wine once...with store-bought grapes. Ben seemed unfazed, but we wonder if he'd be the same if he knew her last relationship ended when she received this text: "Babe, welcome to Dumpsville ... population YOU."

* Another choice moment occurred when model Courtney reacted to news of the horse entrance: "Screw you and the horse you rode in on.” Claws are out!

* “I’ve never juggled 25 women before,” Ben confessed in the episode's opening montage. We hope not. He's probably also never had a first date with someone's grandma as chaperone, a beauty pageant winner who arrived in her pageant sash or a neurotic New York blogger who melted down over a mild confrontation with another contestant and fled sobbing to the bathroom. All three of these ladies scored roses—because surely producers couldn't let the blogger gem of a hot mess go home. She may not be good for Ben, but she'll be good for ratings. On second thought, maybe everyone should have had MORE wine.