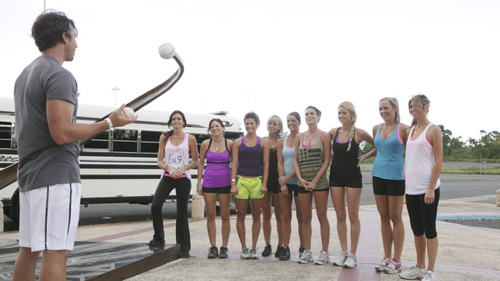 The bevy of potential Bachelor victims was downsized from eleven to nine this week when Ben squired his gang to Vieques, Puerto Rico for a disjointed set of island activities that left the winemaker looking tired and the ladies more tense than ever. On the upside, catty Courtney "broke the rules" to steal Ben away for some moonlit skinny dipping, the gang suited up (read: stripped down) for some ultra competitive baseball and—crucially—a steady stream of bubbly and red wine fueled the reality $hit storm towards still more ratings-boosting drama. Highlights follow.

· Monsoon-like conditions during the show's first one-on-one date drove Ben and divorcee Nikki into a shop to buy dry Puerto Rican ensembles. Once the rain stopped, Ben—suited up in cheesy head-to-toe white—and Nikki just happened to stumble upon a wedding processional in old town San Juan. Gazing pensively at the woman in white, Ben confessed he's "not really ready to be engaged." Ouch! Sorry, Nikki.

· For the episode's "group date," Ben took nine women clad in scanty workout gear to Roberto Clemente Stadium, where they broke into two teams to compete for more time with Ben. Cute accountant and "best kisser" Jennifer struck out for her and her team, and later did not receive a rose. As the winning team rode away with Ben in a massive helicopter, the losers boarded a bus and sobbed all the way home.

· Trouble in Paradise: The episode's second one-on-one saw Ben and personal trainer Elyse cavort over bubbly on a yacht and—predictably—leap off the side for the cameras. The chemistry fizzled when Elyse dropped that she's "sick of being single" and suggested they blow everyone else off and "get married here." Accordingly, a tux-clad Monsieur Bachelor dumped Elyse over a candlelit dinner on the beach. Taking a massive swig of red wine, Courtney speculated, "maybe she drank too much and the Jersey Shore came out."

· Note to Elyse: maybe you should have taken off your clothes. Cut to Courtney, who stalked Ben outside his room with a "night cap" (bottle of red) and whisked him away to a moonlit skinny dip. Everyone's favorite model bitch drew the ire of @reidrosenthal1, who Tweeted "Courtney has completely hijacked the mind, body and soul of the bachelor. She's a reality terrorist". Her quippy reaction to the night's events? "I feel like I'm winning."

· Episode 5 Do's & Don'ts: Blakely (AKA Fakely, Jugs) scored the Best 180 Award when she confessed to Ben that she has grown personally as a result of being on the show. A tired-looking Ben perked up at the remark before kissing her passionately. Score = rose.

· PhD student Emily, on the other hand, drew Ben's ire when she called out Courtney for being insincere for the second time. "Drop it," he said. “Tread lightly. That’s all I’m saying.” For some reason (ratings?), dramatic Emily still got a rose.

Stay tuned for more boozing in Panama City next week.