Share All sharing options for: Lolinda's Alvin Garcia On Duct Tape And Personality 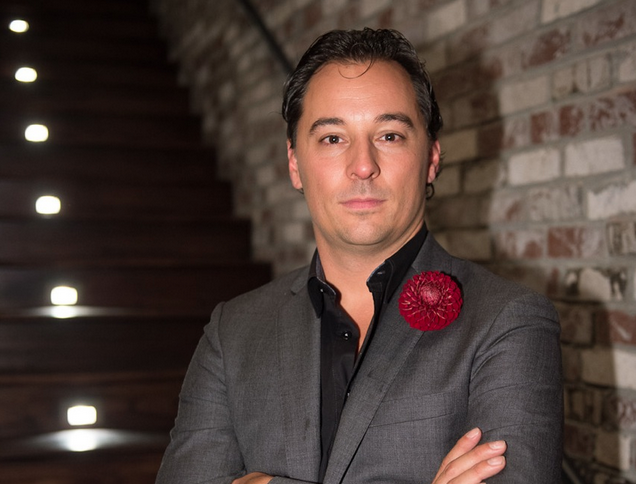 Dashingly handsome, bull head-bedecked Argentine steakhouse, Lolinda, took over the former Medjool address in August, and despite its 220 seats, waits can still be long for the newest restaurant in the Beretta family. General Manager Alvin Garcia, who was formerly the general manager at sister restaurant Delarosa, is the exuberant presence keeping the crowds content as they wait for a meal of ceviche, blood sausages, and wood-grilled steaks. Eater recently sat down with Garcia to talk about the first couple months in business.

7:30 p.m. on a Saturday night, what's the wait for a table? It changes here, because we are so big and have so many seats. If we get a lot of large parties, it can be a little bit longer of a wait. It can be an hour, hour and fifteen. But if we don't get those large parties, for walk-ins it can be 30-45 minutes, which is great.

What's the longest wait you've ever seen? Two hours. But that was for a party of eight.

What can I do to make my wait shorter? It's great because we have two different bars, upstairs and downstairs. We also take folk's phone numbers or allow them to call ahead and put their name on the list ahead of time. So lots of options. Between fourteen [bar] seats downstairs, and ten [bar] seats upstairs, cocktails are a pretty easy way to help with the wait.

Has anyone come in and tried to make negotiations for a table? Absolutely. I was offered a date one time with a woman's daughter. That was a little much. I politely declined. She said 'I want to hook you up with my daughter, I would love for the two of you to meet. How long is the wait? Can you help us get a table?'

Was the daughter there? She was not. She was willing to show me a picture.

Did you take a look? No.

What is the most outrageous request you've received from a customer? I don't get any strange requests anymore. At one point in your career you realize they're all just the requests they are. I did have a guy one time tell his server that he wanted Negra Modelo in a bottle and we didn't have it. They offered something similar, brought him a taste and he didn't want it because it wasn't in a bottle. So I left the restaurant, went down the street, grabbed a beer as close to a Negra Modelo as I could find, and brought it back.

And he was into it? He was totally into it! He was visiting from Tallahassee, Fla., and his son had just gotten a promotion at Facebook. So he was all excited, but didn't understand any of the beers. He was used to Bud Light and Coors Light. For right or wrong, we don't carry any of those beers. He was just stoked to have something he recognized and knew.

Who are some of your favorite customers? I can't pick, they're all great. They're all coming in for different reasons. Some people are on first dates, some people are celebrating a birthday party, folks are celebrating something. With every individual, I get an hour and half of their life to have fun. I did have one guy, when I was GM at Delarosa, that used to tell me what was going on at the restaurant when I wasn't there. So he was invaluable. If we had a new employee who did something wrong, he would tell me, he was like my little mole. He has come in five nights a week for the past two and a half years. When he would go on vacation we would worry that something was wrong with him.

I heard Michael Ian Black was at Beretta the other night. Have their been any notable characters or VIPS at Lolinda? We did get a call from the manager of Red Hot Chili Peppers. We got a call that they wanted to order and eat here, but they ended up going somewhere else. That's as close as we've had so far. I remember when I was at Delarosa, we had the guitarist Kirk Hammett [from Metallica] come in, he came all the time to the restaurant. One day he walked up and said, 'This place is rock 'n' roll, and trust me I know rock 'n' roll. That was rad.

What's your favorite dish on the menu? Choripán. It's a classic Argentinian sandwich. It's got sausage, it's amazing, simple, delicious. And if not even that, it's just a steak. Steaks are all cooked over wood fire, so they are the best part of the menu, I think.

Do you find the clientele here similar to what you experienced as a GM at Delarosa? No, not at all. It's very different. In the Mission, the food and the beverage are kind of what the meal is about. You talk about it, you enjoy it. In the Marina, the food and the beverage are the background. People go out to have a good time. Whereas here, in the Mission, you have folks who are coming from all over the Bay Area, coming to the Mission because of where it's located and the amount of amazing restaurants here. They are here to really eat and drink and understand what they're eating and drinking, and care about technique. They're not just going out to have a good time, they're going out to eat at a tapas restaurant they may not have in the South Bay.

When you are not eating here, where do you like to eat? I'm always eating here because we just opened [laughs]. I wish I had time to eat somewhere else. When I did have time, Jeez, I eat everywhere. Living in the Marina though it's easy to eat out. Tacolicious is awesome, Mamacita is great. Of course I would say Delarosa. I go to Don Pistos every once in a while. I had an amazing meal recently at Comstock Saloon. It was awesome. Our server John was phenomenal.

At the end of the day, what's the one Gatekeeper tool you need to get your job done? A good friend of mine told me that duct tape and personality will get you everywhere in a restaurant. Being at that front door, it's all about getting people in and working with folks and it takes an amazing staff. Folks just want to know that they're cared about, even if they're waiting, that you know who they are and that you're checking in with them.

What do you use the duct tape for? [Laughs] That's a secret.
--Chloe Schildhause

Curtains Up on the Madrigal Cocktail Bar Near the Opera House, and More Openings

For His Next Move, an Acclaimed SF Chef Takes Retirement Home Dining to a Luxury Level