Joey Elenterio: On Chez TJ And What's Next

Share All sharing options for: Joey Elenterio: On Chez TJ And What's Next

Last week, Chron Rising Star Joey Elenterio shed his Chez TJ chef whites for good, and joined the land of unemployed chefs to plot his next gig. Eater just caught up with Elenterio for an exit interview over the phone.

When was your last day? I put my notice in at the beginning of October and my last day was Tuesday.

This was a planned exit, right? Yeah well, me and George didn't exactly see eye to eye and decided to part ways. I've been there for three years now, first as a sous chef [with Scott Nishiyama] and then as executive chef, so it was time. It's time for something new.

What's up next? For now, I'm just networking, recouping and recharging. I'll be headed to Austin to do some research. We'll see what comes of it. I've also got the Chef's Holidays event up at the Ahwahnee in Yosemite, so it will be a busy winter.

Do you have any idea who [Chez TJ owner] George [Aviet] will hire? I know he's talking to a couple people. He was talking to the sous chef at The Plumed Horse, but I'm not sure who it will be.

How would you describe your time at Chez TJ? It's been tremendous. Having a garden and so much at my disposal was mind-blowing: having the ability to use every part of plants, great ingredients and being put in the spotlight as I was. I had big shoes to fill and it was amazing. As much as George and I had our differences I can't thank him enough as an employer.

And now, a parting shot of Elenterio's fingers: 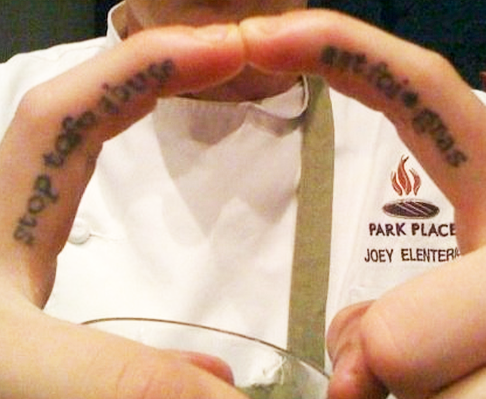