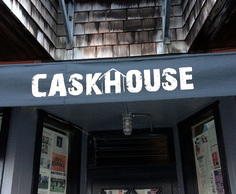 Top Chef judge/New York restaurateur Tom Colicchio recently had his lawyer send a cease and desist to John Dampeer of Crafthouse, a Noe Valley restaurant that isn't even open yet. A first time restaurateur, Dampeer's chosen business moniker comes too close for comfort to Colicchio's Craft restaurant empire in New York. So Dampeer did a quick name switcheroo to Caskhouse. (See: awning, pictured right.) This wouldn't be the first time a New York lawyer fired pesky trademark grievances from across the country. Nor would it be the first time Colicchio's lawyer did. Heck, a Colicchio beef could be the best thing that ever happened to Crafthouse Caskhouse, PR-wise.

Now, as you can see with a first peek above, the restaurant is getting near-ready for action. Dampeer says they're waiting on some ADA issues, and he's hoping to open by the end of next week—just in time to catch the Christmas shoppers with their menu of eight beers on tap, sandwiches with house-made condiments, and other "tavern-style" bites. Keep in touch for a firm opening date.