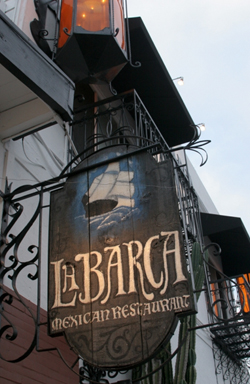 THE MISSION - GrubStreet gets an update on Namu Gaji's opening, which has been pushed back a week to early March. [GrubStreet]

THE MARINA - It's time to pay last respects to the fratastic margarita and Tex-Mex fest that is La Barca. Inside Scoop learns their last day in business will be March 31. [ISSF]

TENDER NOB - 7x7 tries everything at Sweet Woodruff, and seems to like the guinea hen hot pocket and the cream of parsley soup best: "It wasn't heavy-handed like you might expect a cream-based soup to be; you could taste the earthiness of the parsley root in between the nutty crunch of toasted pine nuts and the light sweetness of the golden raisins sprinkled throughout." [7x7]

OAKLAND DISPATCH - The ETA for the Oakland outpost of SoMa wine bar District is not very exact at this point: March or April. But the plan is shaping up nicely for a cocktail list in addition to the expected lengthy list of wines. A host of small plates and outdoor seating are also en route. [EaterWire]