The Bachelor Episode 7: Shark Diving and a Pina Colada Meltdown

Share All sharing options for: The Bachelor Episode 7: Shark Diving and a Pina Colada Meltdown 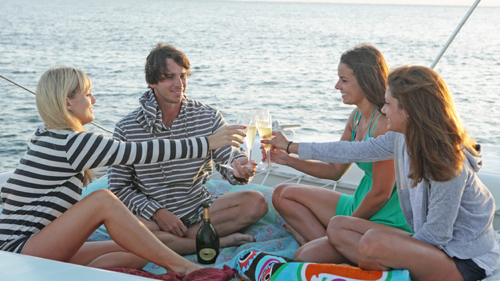 Setting: Belize. Newsflash: We knew she was bad, but we didn't show she's scary bad. This week saw manipulative model Courtney wonder aloud to Bachelor Ben, as they explored a Mayan temple hand-in-hand: "Is this where they do human sacrifices?" I guess that depends on how you interpret sacrifice. In another high-drama episode, the scary model continued to worm her way into would-be hubby Ben's heart, and the Bach took three of his remaining six girlfriends shark diving. Cue: tired theme of overcoming fears together with lots of mimosas. Then a piña colada-fueled meltdown at the rose ceremony made for some of the best bitchy dialogue yet.

· The ladies produced a gag-inducing number of "OMG"s upon arrival at the episode's home base, the Coco Beach Resort. In the not-so-giddy camp: Ben, musing that the island's "slow lifestyle" gives him a chance to reflect on his relationships, or lack thereof. Really it's all code for frolicking semi-nude for days on end.

· Lindzi—who was famously dumped via text message prior to the show—was the lucky recipient of the episode's first one-on-one date. Ben seems to have a thing for sinkholes, because he took her to a place called The Blue Hole to leap from a helicopter into the water. Later, the two tossed a wine bottle containing a "fairy tale" they'd written into the water while canoodling on the dock. More interesting: the claim Ben's show contract required all wine he drank on the show to be at least $20.

· Heading into his second one on one date with Courtney, Ben confesses, "I'm thinking big picture." Sure enough, having climbed a gazillion stairs while holding the model's hand AND a bottle of wine, the Bach waxes philosophical about their relationship while perched on top of an ancient temple. Too bad her bizarre side emerged when she plucked a tarantula from the steps and let it crawl all over her. "[Let's call him] Terry," she says. How interesting: rhymes with scary.

· Plucky southern gal Kacey B., divorcee Nikki and NY fashionista Rachel try to warn Ben about Courtney's bad side on their three-on-one shark diving date. The Bach seemed to get the message, but maybe his brain is fried from all the sun and booze, because he still chose the scary stunner over Rachel and brainy Emily at the rose ceremony. Then again, we're not really sad to say goodbye to whiny Emily, whose bad wine raps have become tiresome.

· "I'm ready to get rid of some girls," creepy Courtney had announced before the rose ceremony. She spars with Emily one final time while gleefully dressing a tropical drink with an umbrella and cherry. She just might be crazy, but it looks like she makes a damn fine drink.