Share All sharing options for: Albert Rainer, on Schnitzel, Oktoberfest, Germans in SF 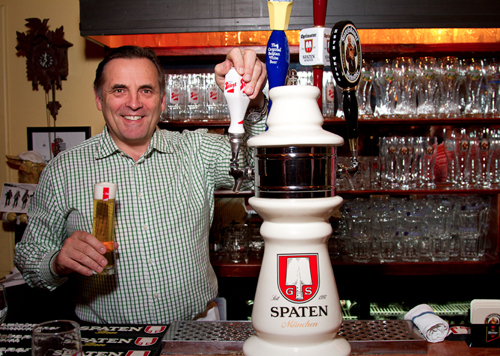 It's been a year and some change since Alsace native Albert Rainer and his brother Klaus went out on a limb to open an Austrian restaurant on Polk Street. After flipping through two turns on a night they tried to make a "soft" opening, their baby Leopold's went on to get all the critics loopy with praise: Unterman, Kauffman and even Bauer, who bestowed the joint with 2.5 stars despite its raucous atmosphere. After Leopold's first year in business, we can safely say "Where can I find a winning wiener schnitzel?" now has an answer, and Rainer sits down to tell us about what went wrong and right during year one. 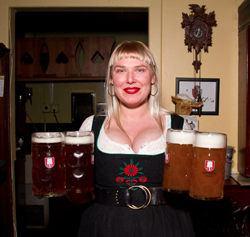 Did Leopold's turn out how you expected it would? My dream has always been to recreate a comfortable, cozy space and atmosphere that would take me back to the Austrian gasthauses of my youth. Yet for many years, I was under the impression that the reason there were so few Teutonic restaurants in San Francisco was because there wasn't much of a market for them. So I opened Leopold's with a cautious optimism, but was very pleasantly surprised when we were so well-received. Also, we were very lucky in having a terrific staff right from the beginning, and almost all of them are still with us after a year in operation.

What was the biggest surprise of year one? I suppose it has surprised me how Leopold's has inspired so many San Franciscans to want to express their Austrian or German heritage, which in many cases had been long-ignored or forgotten. Also the acceptance of our "Alpine" based menu and the appreciation of serving beer in special glasses. I was particularly happy about how many young people were drawn to us and began bringing in their parents who are of Austrian and German heritage, or young parents of Austrian or German heritage bringing their American-born children in to experience their native culture. Even Austrian and German tourists seek us out, which I find sort of funny.

Did you have to change anything major in the first few months? Other than hiring more staff to fill out the crew, not really. We stuck to our original vision and our guests responded very positively from the beginning. We watched what guests liked and made some minor changes that surprised them, like adding sauerbraten, fried chicken or Christmas goose with wine or beer pairings.

Were menu items did you know would be successes from the start? What didn't work? Definitely the wiener schnitzel, goulash, and apple strudel! One that didn't work so well was "Tafelspitz"—an Austrian favorite of boiled beef, thinly sliced, served with carrots, celery, onions and beef broth, accompanied by horseradish, apple and vinegar sauce, with roesti potatoes. Too bad, because I love it.

What's the crowd like on the average night? We usually fill up on week nights between 6 and 6:30 p.m., and on weekends by 5:30—mostly with our neighbors and families from Russian Hill who enjoy an earlier dinner. As the evening progresses, the more "spirited" crowd begins to arrive to lay claim to the community table, booths and the marble beer bar. Many times the communal table is filled with celebratory guests in larger groups which raises a great vibe in the restaurant.

Were you aware of when the critics came in? Just one time.

What continues to inspire you? Happy guests. I remember one guest who walked through the front door in the middle of July and said, "wow, it's like a Christmas party in here!" Seeing groups of strangers enjoying each other's company, witnessing great human interaction in a fun, wholesome, spirited atmosphere enjoying good food, great beer and wine and a lively conversation. Guests on their way out the door turning to us, unsolicited, to say what a great time they had. Our job is to make people happy, how great is that!

Fantastic. The constant flow of new restaurants opening with new ideas and concepts also inspires me to always be searching for ways to improve the experience. The support and interest from our friends in the restaurant industry has been great. Especially our friends and neighbor from La Folie who very very supportive. They organized a large dinner with fellow chefs Hubert Keller, Martin Brock from Gary Danko, and Xavier Salomon from The Ritz-Carlton, at the very beginning. It's great to see young chefs from the more hip places in the Mission who come in and enjoy our Gasthaus too.

What are your plans for 2012? We recently opened up for brunch and we intend to continue to expand that. We'll aslo be adding more Alpine-inspired special beer dinners. And—by popular demand—we're exploring opening the bar a little earlier and more happy hour possibilities. I'm also constantly improving and expanding our wine and beer programs with emphasis on more options from Austria, Swizerland, Southern Tirol, Slovenia, Hungary, Friuli and Germany. Right now, we're installing a new web based waiting list system too. But the real coup is that I'm trying to convince the city to let us close part of Polk Street for a real "Octoberfest " in the fall.

For more One Year In posts published today across the Eater Universe, head over to Eater National.