To thoroughly enjoy this season of The Bachelor featuring Sonoma winemaker Ben Flajnik, we welcome Hip Tastes Events maven and blog author Courtney Cochran, back this week after a hiatus to guide you through the wine-splashed drama. 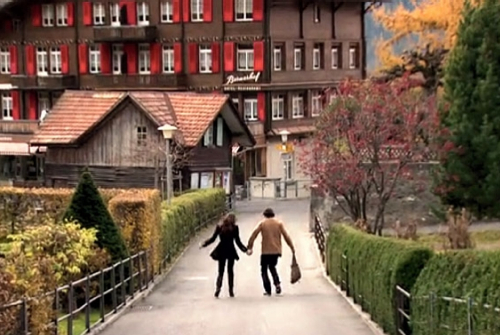 In Episode 9 we follow the intrepid Bachelor to his final destination, Switzerland, for a hot tub-filled melee of three dates, one surprise return contestant, and just two roses. The Swiss dismissals were ultimately devastating for the two women who won't be returning for the season finale, but the journey continued to reward watchers, who groaned their way through more high-altitude hijinks, excessive imbibing and corny lines. (See Ben in the helicopter on date one with divorcee Nikki: "my relationship with Nikki is getting to new heights, but at the same time it's grounded".) As the camera pans from the duo embracing atop a dramatic peak reminiscent of Avatar "floating mountains," we took one more sip of The Bach producers' Kool-Aid, a mixture of awkward one-sided love confessions, adrenaline-pumping jaunts, bikinis and back-stabbing.

· At this point in the season, even the Swiss would have trouble staying neutral on their feelings about Ben's hair. Get a cut, my man. Surely this "Separated at Birth" montage must be spurring the shaggy guy on to some sort of shearing action. At this point, his hair maybe acting as some sort of force field, keeping good sense out, because the Bach chose manipulative model Courtney AGAIN this week over sweeter contestant Nikki in a tearful rose ceremony. This, even after wounded rejectee Kacie B. flew all the way to Europe to tell Ben that if he chooses two-faced Courtney he'll get his "heart broken."

· Twitterverse feathers continue to ruffle as Courtney worms her way further into Ben's heart, this week by seemingly playing nice. Picnicking in a mountaintop setting— in a cow pasture, no less—and coyly cradling a glass of red wine, the LA-based model demurred to the Bach: "I want normal in my life." When he pressed her about her bitchiness, announcing it was "pretty messed up" that she taunted other women on the show, she summoned all of her small stock of humility to admit that "I've been pretty immature at times." Says Twitter's @Bri_Cook: "Courtney, frontrunner on #TheBachelor, has dated Jesse Metcalfe, Adrian Grenier & Reese Witherspoon's husband Jim Toth. #notafamewhoreatall"

· Regardless, Ben presents Courtney with a key to the Fantasy Suite. "It's a big step" she says of the overnight stay—riiiight, even bigger than skinny dipping in Puerto Rico?

· It's a good thing the real world isn't reality TV, because if it was, nice girls would most definitely finish last. To wit: Texas divorcee Nikki got the Swiss dismiss after a high speed heli tour of the Alps followed by a love confession redux and Fantasy Suite overnight in a log cabin. Said "log cabin" came complete with a hot tub, though the requisite bikini-clad makeout session was most definitely a normal Bachelor thing. Verdict: Nikki was nice but not very dramatic. As Courtney might say, "another one bites the dust."

· In what was billed as "high-adrenaline" date—but missed the adrenaline part, at least for viewers—Ben squired biz dev gal Lindzi on an Interlaken rapelling adventure. Problem is, compared to jumping out of helicopters (check, for these two) and climbing the Bay Bridge (check, for the show), sinking slowly into a gorge (or a sinkhole, for that matter) just isn't very compelling. At least they transitioned quickly to another hot tub, where Lindzi danced around the "L word" while Ben practically shouted "I love Lindzi!" in a spliced-in confessional scene (props. producers). Still, she got the Fantasy Suite invite, and the two retired to posh environs for some off-camera canoodling.

· Rejected Southern baton-twirler Kacie B. came a long way to reiterate to Ben how much she loves him, and to warn him about model meanie Courtney. Too bad her pop-in prompted an expletive from the normally genteel Bach and concluded with her lying prostrate on the ground in a hotel hallway. Then again, the encounter did give producers a chance to up the ante on the Courtney situation, leading to a brow-furrowing consultation between the Bach and Chris Harrison.

· But were we really surprised when Ben chose the sexy brunette again in the rose ceremony? Sadly, it seems Lindzi—and the Bach's heart—don't stand a chance in what's escalating towards one of the most darkly foreboding conclusions ever. But hey, at least Ben's got his wine project no matter how his heart fares. And isn't this show, like, the best marketing ever?