Share All sharing options for: The Bachelor Episode 6: Loincloths and Sauvignon Rhymes 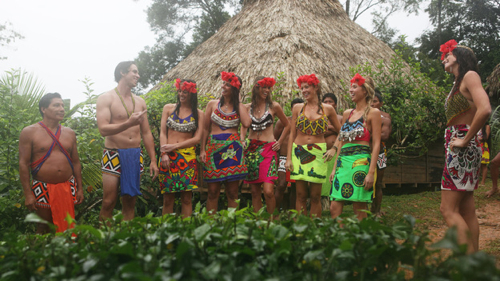 Where does one begin? Episode 6 was—in a word—awkward. From the moment Ben pulled up to the phallic Trump Tower Panama City in a Jeep Wrangler to the final rose ceremony, the show throbbed with a tropical adventure vibe the producers seem to have down pat. Panama City, Panama and its rain forest environs were the setting where Ben's floppy hair officially reached Josh Groban status (what, no haircuts on location?), his wooing of the ladies was appropriately groan-worthy, and bitchy model Courtney once again stole the spotlight by taking off her clothes.

· For a human minute, I want to say it was commendable that sweet Southern gal Kacie B. shared her eating disorder past with Ben during her one-on-one date. [Cue: Blue Lagoon-esque foraging for coconuts and prime make-out moments.] But when pressed further about her hobbies, pretty much all she could come up with was going to the grocery store and working out. Kacie B. digs deep, but there's not a lot of depth.

· Going native: The episode's group date saw Ben squire six women to a remote river village where the gang suited up in native garb. Ben actually sported a loincloth, and everyone painted each other with authentic tribal symbols: Courtney scrawled C+B=? on Ben's back. The model also seized the opportunity to go bra-less under her scanty native top, scoring Ben's admiration and the remaining ladies' rage. Check, check. Indigenous cultures everywhere are offended.

· It's tough to top the awkwardness of a group date, but certainly the season's only two-on-one date—featuring Blakeley a.k.a. Jugs and "fashion sales rep" Rachel—grabbed the spotlight for its sheer weirdness. After a three-way salsa "lesson" saw the ladies literally war over dance time with the bach, it gets even more weird when Blakeley breaks out a scrap book she's created to document her growing love for Ben. Though the cocktail waitress claimed she felt elated "on a scale of 1 to wonderful" about her chances, Ben dumped her on the spot, giving the only night's rose to Rachel. "I wish her a good flight" quipped the leggy blond.

· Other $hitacular moments: Kacey S. was booted off the show when Chris Harrison outed her for being "in love with another man." As our resident bitchy model would say, "another one bites the dust." The episode's wine highlight came when PhD student Emily—who continues to war with Courtney on camera—rapped her feelings to Ben, rhyming "Sauvignon" with "blond." Though a stretch, we give her an A for musical effort, a D for sparring ability.

· Jamie grabbed the lead for all-time awkward series moment when—galvanized by the realization she'd never kissed Ben and was at risk of going home—she straddled him in a mini dress, accidentally ripping it, and proceeded to make out with him. Perhaps realizing the lap dance was too forward, the nurse backed off and re-approached the kissing situation from a clinical perspective, telling him when to open his mouth and when to close it. Ben cried, "I can't even handle this right now! It's like an instruction guide!" Not shocking: no rose for Jamie. But big laughs for us. Big.

Tune in for backstabbing in Belize, next week.