Inside Cassava Cafe, Opening Monday in the Richmond

Share All sharing options for: Inside Cassava Cafe, Opening Monday in the Richmond

A new daytime cafe called Cassava is just about ready to officially open this coming Monday, March 5. Owners Yuka Ioroi and Chris Toliao got married last week, so it's probably wise they've delayed things a bit from the original ETA of Feb. 27. Toliao's last two jobs were at Tokyo's 2-Michelin-starred Kikunoi and, before that, as a sous chef under Dominique Crenn at Luce. Ioroi was last seen bartending at Starbelly, and you can find more on both of their backgrounds here. 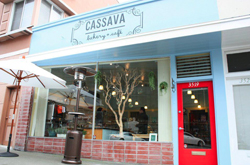 The name, Cassava, comes from a filipino cake Chris loved growing up, coupled with the fact that its a root also known as yucca, which sounds just like Yuka. So the owners get points for being clever.

The sample menus on the website detail American and Japanese breakfast options, several soups, salads and thoughtful-seeming sandwiches on foccacia bread. There's also a substantial pastry case filled with quiches, croissants, house-baked cookies and "empanadas." Hours of operation here are 7 a.m. to 5 p.m. Now check out all the food pictures over on Facebook, and send in early reports over the EaterWire.