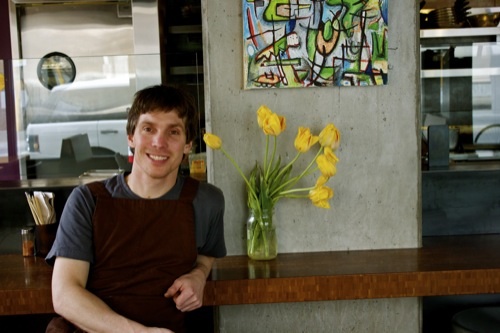 Nojo, the year-old Japanese izakaya from chef/owner Greg Dunmore (previously chef at Ame), has been praised by critics for fresh and interesting dishes as well as a team approach to service, where customers are taken care of by a majority of the staff. The restaurant's early success allowed it to expand from evening service to lunch and dinner. Nojo has also inspired some sticky fingers, and not just from sauce that might be on a skewer. First, the tequila bottle trophy Nojo won for Best New Restaurant by 7X7 was lifted, followed by an entire custom-made redwood table that was used for outdoor dining. We sat down with Dunmore to reflect on the first year's ups and downs — and discovered there were mostly ups.

Did Nojo turn out how you expected it would? Yes, and it keeps turning into a life of its own. It has been amazing to see how much we have changed and grown since day one.

What did you tweak in the first few months? What didn't we tweak? Everything was getting tweaked and it is still continuing; I am not sure if it will ever stop.

What menu items did you know would be successes from the start? Chawan mushi I thought would do well; other than that, I had no idea. Case in point: Since day one, the skewers have just taken off.

What didn't work? There is the dish called nikujaga, essentially a Japanese-style pot roast. It is one of my favorite dishes, but since day one it never took flight. It is not that people did not like it, it just was not as popular and we would end up eating it ourselves.

Now, one year in, what's the crowd like on the average night? I would say it is very mixed, especially since we are in the theater district.

Were you aware when the critics came in? Half and half.

What continues to inspire you? My customers, my employees, seasons, and being a successful restaurant, which we are still working on every day.

What are your plans for 2012? To keep evolving and getting better.

You got your stolen tequila trophy back, thank goodness. Did you ever get that table back? I wish! I have pretty good idea of who stole it and where it is, but without proof or actually seeing it, it is impossible.