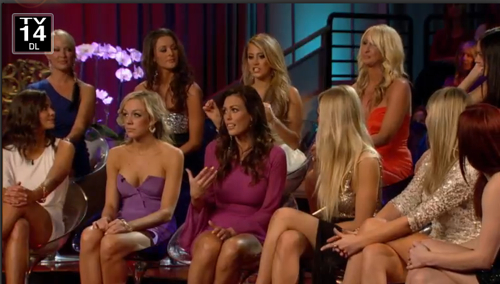 Chris Harrison milked the news for all it was worth. And it was worth a lot: model meanie Courtney - a finalist in next week's season finale - would make a surprise appearance to face off with the show's rejectees in this week's Tell-All episode. Things got off on a salacious note as producers played an opening montage of some of the show's most awkward moments (see: dress ripping and mechanical kissing) and the F-bombs started flying almost immediately. Then came Courtney's shocking transformation from backstabbing "famewhore" to sobbing apologist. But was it sincere, or just another opportunity for Courtney to commandeer the spotlight? (We're gonna give you a hint, we pretty sure it's the latter.) To the recap for why!

* Oompa Loompa Overload: Is it just me, or is the level of spray tan positively correlated to the level of crazy on this show? Jaclyn took the cake - and spewed forth her fair share of obscenities - for most orange on the Tell-All, though personal trainer Elyse AKA Jersey Shore wasn't far behind. Shall we give Elyse an honorable Oompa Loompa mention?

* Undertaker Outlash: Season 16 interloper Shawntell, an undertaker, returned to confront the women about their "big hips" and "bitch" digs from when she crashed a rose ceremony. Though she claimed the girls bashed her because she's "white trash" (her words), several apologized, saying it was in fact because of "the way [she] did it." I guess sweeping past them towards Ben in a skin-tight red dress wasn't the most endearing move she could've made when crashing the show. Still, all ended well when one generous rejectee declared Shawntell "beautiful." Yep. And ballsy. Our verdict: a Bachelor mixed bag.

* Blakely-Gate Part II: Because wherever "VIP Cocktail Waitress" and ex Hooters girl Blakeley goes, drama follows, the show's inter-rejectee heckling swirled around the buxom brunette. The ante was upped when Blakely AKA Fakely called her catty costars "small-minded people." At least she didn't call them "small breasted." Because we can see how, relative to her, at least, they certainly are. And in the context of this franchise, that would be a much *bigger* sin.

* Will the real Fakely Please Stand Up?: Courtney's stock seriously plummeted when she retracted all of her delicious digs from throughout the season. And it didn't even seem legit. She pouted, "I didn’t think it through. If I could’ve gone back and thought ahead — oh, this plus whatever equals this — I would’ve handled myself differently. I was really defensive. I should’ve accepted your apology. I shouldn’t have said mean things. And I’m sorry. And that’s why I’m here. To say I’m sorry."

Really? We're pretty sure the only thing she's "sorry" for is the way she's been depicted as a monster in the tabloids (Exhibit A: Nicknaming other girls "horsey" and "fatty"). Were her tears for real? Check them out here.

* Tardy to the Party: Ben didn't show up until the very end of the show (after viewers had seen the extended promo for the franchise, natch), when he greeted Chris Harrison with the melodramatic, "welcome to my nightmare." But he didn't have to field all that many questions from the ladies, and when he did, the wine-trepreneur seemed almost relaxed. Could this be the calculating millionaire internet ad salesman we've been hearing about?

* Tampon Confessional: Best repartee of the night easily goes to Monica and unstable blogger Jenna, who had a tense row early in the season that ended with a snide remark about sharing tampons. Last night:
Monica: “Will you accept this tampon?”
Jenna: “I will accept!”
And there it was: the franchise's first successful product placement for a feminine hygiene product (almost as impressive as Kris Jenner's plug for urinary incontinence pads - PROPS).

Next week: The season finale, wherein [SPOILER ALERT] - if Us Weekly's spoiler can be trusted - Ben proposes (SHOCKER) to model Courtney. But Us also speculates Ben has recently been canoodling with multiple Bay Area women, and Courtney seems like a wreck. So we're guessing this Reality "relationship" has already gone to new lows after a high-altitude Swiss proposal. Still, we've got to tune in just to make sure (and hear all the pithy one-liners). Til' then.