One Week In is a new series wherein we talk to chefs and restaurateurs after their first week in business at a brand new restaurant. 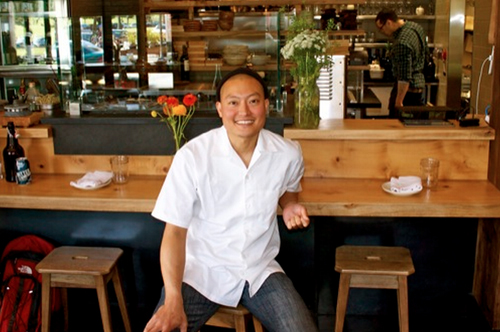 Korean Californian restaurant Namu Gaji opened next to Bi-Rite Creamery a little over a week ago, and its hard-working chef-owner, Dennis Lee, found a few moments to speak with Eater SF before diving into lunch service yesterday. Here, what he has to say on NIMBYs, his in-the-works take-out window, shaved ice, and much more.

How's the first week been? It's been good. Pretty consistently busy. It's kind of weird. Most people that come in are concerned that it's going to be a zoo in here. I think it's making it mellower, oddly enough. We haven't had waits that exceed an hour.

That's great. We're using this text message wait list system. The thing automatically texts you when you're table is ready. People can hang out in our waiting area with a drink or head over to 500 Club for a drink and then they come back.

Any big hurdles this week? I have to say the kitchen crew has been amazing. Most of the problems have been POS related, but we've worked them out. The week has been sort of a who's who of culinary people coming in. Timothy Hollingsworth was in the other night from The French Laundry, Robbie Lewis, the crew from Perbacco.

Anything unexpected happen? Well my days are all jumbled together. Nothing too crazy.

Any early crowd favorites on the menu? The stone pot, the dumplings and the potato puff. As a section, the grilled items have been super popular. It's surprising too, the fish parts and pig parts we have listed on the menu have been surprisingly well-received. People have been ordering everything. They've been getting the beef tongue a lot.

What would you eat if you came in? I'll usually sit down and eat the okonomiyaki. But obviously I like the whole menu.

Anything surprising about working in the Mission vs. the first Namu in the Richmond? As far as neighbors go, they're way more outrageous and finicky here. We've had some major clashes with the neighbors about noise. The health department had to come out seven times because of the neighbors' complaints even before we opened. They started going directly to people's apartments and saying "we can't even tell the restaurant is open. You have to stop complaining." I think people are trying to get their rents lowered.

Man. That's been the biggest struggle, and it was the main issue with our delayed opening. They issued our health permit and then they revoked it because the neighbors complained about the sound of the exhaust fans during one of our private pre-opening events. It's already fucking noisy here. If you take the ambient sound reading on the corner it's already above what's permitted, so there's nothing we can do.

That's so interesting. What's the status on the take-out window? Did you get that permitted yet? That's another neighbor issue. We're doing take-out through the restaurant. We've been using the space as an office during the day, but starting this week we're letting people eat in here. Kind of like a quick service scene. It's nice because it's not as crazy at lunch and a lot of people have been able to come in.

What else is on the horizon? We'll be starting the shave ice take out probably this weekend. I'm going to rotate the flavors with seasonal fruits, a couple different citruses, house-made rice cakes, tapioca and a line-up of other different crumbles and crunches as toppings. We've got sweet red beans too.

Perfect timing, it's supposed to be nice this weekend. Yeah and we have a cool vintage ice shaver. It's about three feet tall and 1/2 a foot wide. We break down these huge cylinders of ice and people can watch us hand crank and shave it to order.

How are you handling the stress? I don't usually get too stressed. I like to stay busy so it's not that stressful.