It's time to take a virtual seat at the Eater Roundtable, a new feature on Eater SF wherein a rotating cast of top restaurant industry folk sit down to blow off steam and talk shop. 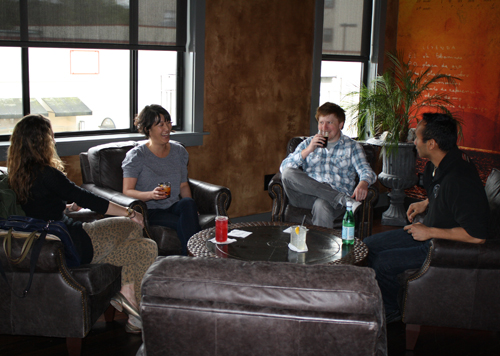 Today our foursome talks about bartender paraphernalia, the efficacy of bar crawls and where to go when a long lost friend suddenly drops in from out of town.

Marek: So I was over at Bar Agricole a few nights ago and the bartender had a finger condom—not on one but on two fingers. I've never seen that before and I asked him about his condoms. Apparently this is a thing that you guys all have, finger condoms.

Kevin Diedrich: We sure do. We need to have a lot of them. If you go to Walgreen's they literally say finger condoms on them. It's more sanitary than a band-aid because it can stop any blood better.

Grant Marek: The dude was making drinks with finger condoms on. It was very off-putting. I was like—are you going to stir it with those?

Kevin Diedrich: It looks odd, and it can be hard to bar tend with them. Especially if it gets bad, like I've seen finger condoms filled with blood.

Lisa Nourse: Awww sick. How does it work?

Kevin Diedrich: Well they look like a condom. And you roll it on. We always joke around behind the bar. We're like don't forget you've gotta pinch the top. Make sure there's no air inside. It's gonna pop. It's pretty tight. There's different sizes, obviously.

Grant Marek: Do you use the magnum finger condom? Why wouldn't you wear a glove?

Kevin Diedrich: I've seen that. But if you grab a bottle with a latex glove, it can cause problems. I've always just used the finger condoms. But I actually stopped using them because I don't always like the way they feel. [Laughter] I use super glue now to stop the bleeding.

Grant Marek: The Agricole guys was talking about bar rot.

Kevin Diedrich: Yeah, it's from all the acid and water and juices all the time. It dries out your hands a lot. One of my friends—Tommy in New York—he had such bad bar rot he couldn't bar tend for a week. At the end of your shift you want to moisturize.

Ok switching gears here. If you have a friend that drops in from out of town where do you take them in SF?

Schuyler Bailey: I think Bloodhound's a good one because it's really easy and the drinks are solid and it's approachable for everyone. It's a good vibe.

What about restaurants? Where can you pop in without a reservation with more than two people?

Grant Marek: Lisa and I were talking about this last night. Places with huge communals. Park Tavern has a massive communal. It seats like 19 or 20.

Kevin Diedrich: The bar itself there seats around 20.

Grant Marek: My brother-in-law was in town asking for restaurants for that night. Park Tavern is a great restaurant that if you're willing to wait a little bit, you'll get in. Suppenkuche is another one for me that I send people to because they don't take reservations. Even if it's your birthday and you really want to go there (because I've tried that) they're like no. Sometimes you'll wait two hours, but you can drink a stein of beer while you wait. There you can pretty easily get food and drink even if you're standing. I've eaten on the corner of the bar where there's no seats before and it's still delicious and awesome.

Kevin Diedrich: What about Gitane? I like Gitane. It's never jam-packed at the bar. And I feel like the turn-around time for seats at the bar is pretty short. Have a drink at the bar and you've got two seats.

Lisa Nourse: They're really good at moving you in and making sure you're taken care of while you're waiting.

Grant Marek: The place you pick has to have a really good waitstaff. If you don't have a reservation you really need that.

Has anyone had an experience where they make you go elsewhere to wait?

Kevin Diedrich: Yeah that's happened to me. I had a random Saturday night off and I grabbed my wife and I was like we're gonna rage tonight. We went barhopping everywhere.

Where does Kevin Diedrich bar hop?

Kevin Diedrich: Oh god, I know we started at Gitane, then we went to Rickhouse, Michael Mina, then we went to Cantina. Then I know we went to the Muppets band place in the Mission? Mayhem. We went to Mayhem then we walked down to Locanda. And then after Locanda we were like, we're hungry now. [Laughter]

Kevin Diedrich: Yeah you just have to spend $300 at bars on gin.
cocktails.

Lisa Nourse: The last time I tried to pursue a major bar crawl was when I lost my front teeth. Going from an art event with Naseema [Khan, Eater photog], to Hog & Rocks, beer and shots. Then I was on my friend's back and we were headed to Velvet Cantina, which I love and I'm a regular, and she bails. Like an idiot, I held on for dear life and then I hit the pavement. Before I knew it, my favorite Velvet Cantina bartender Grant was there with an ice bag. I guess he was out having a smoke and he was the first person I saw when I was totally toothless. He had an ice pack on my face. I've since curbed my bar crawl tendencies.

Grant Marek: I feel like crawls are a good way to hit a place you can't usually go to. Like I can only go to Bar Agricole if I do a crawl. We just did Biergarten and then Dobb's Ferry and then Nihon and Bar Agricole and then Marlowe. Because I had to get to the CalTrain.

What about Una Pizza Napoletana?

Grant Marek: It's the best pizza I've had in the city. And I've only been one time. We went through two bottles of wine before we got our pizzas.

Kevin Diedrich: My wife went there and she said the Una Pizza in New York was better.

Grant Marek: I feel like he's so different from anywhere else in the city. I mean, he goes on vacation with his wife and the place closes for two weeks. It's amazing.

Lisa Nourse: When Saison first started that's sort of how they were. They leased the space when they could until they got more acclaim.

True. Where's your go to, Schuyler?

Schuyler Bailey: I'm going to say Maven because their cocktail-food parings are so interesting. And they sabered a freaking champagne bottle last time I was there. That doesn't happen many places. Everything I ate there was really well done and the cocktails were delicious with what they paired it with. It's a different experience.

Grant Marek: People are so mean in the Lower Haight.

Grant Marek: Every time I go to a bar there I get yelled at for something. They remember me from when I lived above Mad Dog.

Lisa Nourse: My old stand-by is mini bar for a couple reasons. It's stumbling distance from my house. Every time I walk by there's a gentleman on the corner who's hair is similar to mine. It's a little greasier than mine. He always has sunglasses and a hat on at night and he always compliments me on my hair do. I love it. Then I stop in the corner store right there on Divis and McAllister. The owners are brothers and they're awesome. And if there's nobody in the store, he'll do airplane bottle shots with us. So we stop. We do a little shot of Maker's together. Then we go into mini bar. I'll eat 4505 chicharonnes, I'll have a beer. And then if Im hungry I'll go across the street to Little Star. They have the coldest Racer 5. Then maybe go back to mini bar. They let my dog in.

Grant Marek: I go to Biergarten a lot. If the sun comes out for a couple seconds you feel it. The two owners' mom is there all the time. The first time I met her, she was like hey I just want you to know I'm their mom. I'm not a cougar. She's so awesome. She's always bussing tables. How many places have a managing partner and their mom's there? And third because they have blankets.

Why is it hard to find an eclectic crowd in San Francisco?

Schuyler Bailey: Go to Garcon. That's another one to go to if you're in a pinch. It's so not frequented and I'm not sure why. Maybe because it's between Beretta and Dosa. We had dinner there the other night at the bar. And there was some 70 year old man there who invited us to his salon. And then there were people there from out of town. And French people there on their first date. Their food is super solid. Their cocktails are really good.

Kevin Diedrich: The industry folks stay away from the Marina.

Grant Marek: I love Tipsy Pig's food. I love the allure of shitty bar-ness at Final Final. The oldest bartender in the city is there.