Share All sharing options for: Locanda's Anthony Strong On Critics and Catastrophes 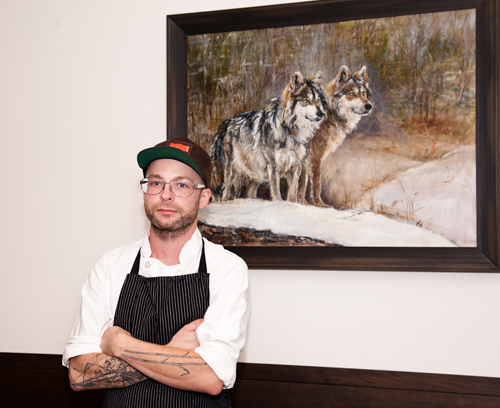 In late April of last year, Craig Stoll's long-time Pizzeria Delfina chef Anthony Strong stepped into the spotlight with the opening of Locanda, where he continues to run the kitchen. By that time, the Rome-inspired restaurant had already generated a ton of buzz, and Strong had taken a lengthy research trip to immerse himself in the ins and outs of real Roman kitchens. Today, after a year action-packed with some nice reviews, late-night BLTs, and a Rising Star Chef induction from the Chron, Strong reflects on the year that was and what's ahead.

Looking back at year one of Locanda did things turn out how you expected they would? We expected a lot of the unexpected, which is definitely what we got. Also, I knew that a lot of equipment ironically "happens to break" just after a year. So a year ago, I set an alarm on my iPhone to remind me to call in soon-to-expire warranties on pretty much everything we've got. That alarm went off yesterday.

What was the biggest surprise of the year? We've definitely had some fun surprises. Our ceiling exploded raining water down into the dining room during service, and an exciting power outage just to name a couple. It's still a new restaurant so surprises are definitely in abundance daily.

Most restaurants make some significant changes to the menu or operations in the first few months. What did Locanda change? To drive and embrace change in the right direction is one of our team's most important values. For instance, we were originally going to serve all of the "Secondi" just as the meat/fish/etc. on a barely garnished plate, literally olive oil and a wedge of lemon, and offer a choice of contorni. But in the end we decided we wanted fully realized dishes without forcing simplicity. Some things that are normal in Italy don't translate as well over here, so we adapted.

Were there certain menu items that have held strong and stayed with you since the beginning? Yes, the Lamb Scottaditto. We run it a few days a week. It's one of the most badass of all the classic Roman dishes. We get in a couple lambs a week, use the chops for the Scottaditto, and work in the rest of the animal in throughout the menu. Instead of frenching the racks and making them anything close to pretty, we cut them to the length of dinosaur bones, beat the riblet up with the side of a cleaver, and rub them with anchovy, rosemary and garlic. Then we grill them directly on the coals pressed under bricks from Annie and Craig's yard (washed and wrapped in foil).

Any menu items that just didn't work? We've definitely got some dishes we've worked on, set on a back burner, scrapped, revisited, spent way too much time working on, and they still never make it into a customer's mouth. That's part of the creative process. There was this melon thing that just killed us last summer. It never quite came together and so it never made it onto the menu.

Now, one year in, what's the crowd like on the average night? It's really a privilege to have guests who are genuinely excited about food and restaurants. San Francisco diners, in general, are absolute gems. It makes our jobs a lot easier knowing that people are so into food and mostly relaxed and just pleasant to serve. We're also so lucky to have regulars from the neighborhood who come in constantly and to cook for the kind of people who buy us out of fried brains in less than a night.

Were you aware when the critics came in? How did you handle it? Not going to lie, it's stressful and awkward. But as a cook it is still exciting in some way. Some of them might not get it, but it's important to have objectivity about it. At the end of the day if we're cooking our asses off to provide an honest, gracious experience as if everyone was a critic, we know we'll be successful.

We pretty much always tend to know, but every once in a while a critic will slip in under the radar. We had no idea Josh Sens was in, and I was super anxious about the review not even knowing what he'd eaten. Phew thank god it was good...

What continues to inspire you? Ok. Not sucking up at all... but Craig and Annie. In my opinion, they are what all restaurateurs should aspire to be.

You've been in the Mission for quite some time right now. Would you ever run a restaurant anywhere else? I'm so in love with what I do, and a one year old restaurant is still an infant that needs a lot of care, so honestly we're avoiding taking more on at this point.

Any big plans (business or personal) for 2012? Just keep getting better and tighter everyday.