Share All sharing options for: Gioia's Karen Gioia Talks About The First Week

One Week In is a new series wherein we talk to chefs and restaurateurs after their first week in business at a brand new restaurant. 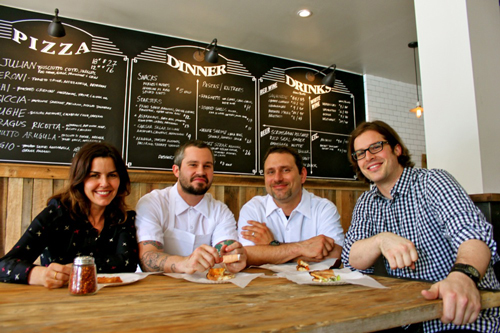 Karen and Will Gioia have put the Berkeley permitting issues behind them and are successfully one week into their first city venture, Gioia Pizzeria on Polk Street. Yesterday afternoon, Karen took some time to chat with Eater SF about the past seven days of her restaurant's young life. Here, what she has to say about the pizza competition in SF, the return of her son Julian, why you should try the entrees, and much more.

How's the first week been? It's been good! We're a welcomed addition to the neighborhood. A lot of families are coming in early on with a lot kids, which is nice. In the evenings we're getting pretty swamped. It's about 45 minutes to an hour and half for the wait most nights. People enjoy the simplicity of it and it's neighborhood place.

I'm excited. It's in my neighborhood! Yeah, I think people are finally happy to have a pizza restaurant in the neighborhood. People walk down and put their name in and they go home. Then we give them a call back when their table is ready and they come back, which is nice.

That is nice. Any big hurdles this week? Me being a hostess for the first time! Not really anything else. We're trying to iron out the service and be able to get the food out quickly while handling the to-go pizzas. The to-go food sometimes gets on a longer wait list, but all of our staff has been working really well together and we've been doing a lot of training and we want everyone to be comfortable.

What are people loving on the menu? I think that people are really enjoying the pizzas right now. The sausage pizza and the Julian pizza, which is named after my son are popular.

What's on the Julian pizza? Well, right now it's a sweet and spicy pizza. It depends on his mood. It has proscuitto cotto, parsley, red onion, garlic, aged provolone, and chili. We're always changing the menu based on his tastes.

How old is he? He's 4. He actually gets back tomorrow. We sent him to be with family in Chicago while we opened the restaurant.

What dish are you most excited about? The entrees! We're most excited about them and we're hoping people start exploring beyond the pizza. We have the most amazing skirt steak from this small ranch that only provides us the meat. We're going to do soft shell crabs tonight.

How was opening a place in San Francisco different from opening the first Gioia in Berkeley?Well, it's a big leap. The one in Berkeley is just a slice joint. It's just 500 square feet; people are coming in and getting a slice. The people are much more relaxed. Here, people are much more critical. We listen to them and our service is getting better all the time. People here have higher expectations and we have higher expectations. I mean this is a full restaurant. This is actually more in our comfort zone. Between Will, Dennis, and I, we've got 12 years of cooking experience at Chez Panisse and Zuni. It's a great departure for us and an evolution that we're very happy about.

Speaking of Berkeley, I know there were some legal problems. Have those all been dealt with? Yep. We've got our business permits. It was really tough; we were under the understanding we had the right permits and a few years later we realized that we didn't. We took all that very seriously when opening this place. We made sure all our I's were dotted and T's crossed. Opening a restaurant is such a huge endeavor. I mean just to get it open is tough and then you have to do the food! We wanted to create a place that's small, neighborhoody, unpretentious, and casual — someplace you can kickback. A place where people come with their friends and enjoy simple honest food and I think people are getting that. We're not trying to do fine dining. We have everything be affordable and approachable. Our highest bottle of wine is $45 and we have a lot of great local beers on tap.

Has anybody important come in? Just some friends. I have a lot of contacts in the East Bay — a lot of food industry people. But so far, no great chefs, or hopefully not Michael Bauer yet, have come in.

San Francisco's a great pizza city. I mean there's so many awesome places for pizza already. Pizzeria Delfina. Toni's. Pizzetta 211. How did you feel about going up against the competition? As I've noticed, being in Berkeley, everyone likes to compare you and I always say it's like apples and oranges. You could compare us to A16, but it's a totally different style. They have a wood oven and make Neapolitan pizzas and we do a New York-style pie. We set ourselves apart by doing New York pizza with a California mentality with local, seasonal toppings. Are we part of the pizza craze that's happening? Yes, but I think pizzas are very subjective that's why there are so many pizza places. Some people like blistering, blackened crust and some people like crispy New York slices and old school toppings — I get that all the time. There's room for everyone. I'm confident that we can hold our own and I'm sure it will give fellow New Yorkers a trip down memory lane. That's how it all started. Will wanted to create a pizzeria like the ones he remembered when he was a kid growing up in Brooklyn. Even in New York everyone has their favorite. It can cause heated debates. We are not trying to compete just doing what we think is the best. There are so many types of pizza. You can't compare wood burning to deck ovens, however people always do. I feel their is room for everybody. I know we have found a good spot in Russian Hill. A neighborhood joint just liked we hoped.

What else is on the horizon? Another project?

Yeah. Not yet. We're getting this one running. Eventually we want to open another one here, be it a small one or large one in the neighborhood. And we want to open one in New York and be bi-coastal. That's our ultimate goal. To be there and here. But right now we want people to give the entrees a chance.