One Week In is a series wherein we talk to chefs and restaurateurs after their first week in business at a brand new restaurant. 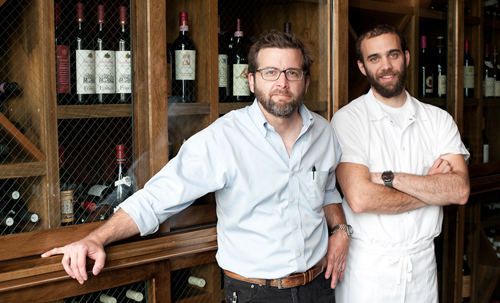 Last Monday, Bon Appetit contributor/former Quince wine man David Lynch unleashed his much awaited "wine tavern" called St. Vincent in the old Heart space. This morning, Lynch spent a few minutes with Eater on the phone to recount how things have been going during the always crazy first week in business. Since this is also Lynch's first restaurant, and a very personal project at that, there was lots to talk about.

So, how's it been going? Really well. I'm really excited by my staff. I had to go to the Bon Appetit event in Vegas right after we opened. I'm a columnist for them so I had to host a bunch of seminars and such. It was bad timing, but I'm very lucky to have a lot of experienced people to rely on here. I had all these plans about how the training was going to go, but we ran out of money and I had to throw everyone on the floor. I have faith in them, but I hope we can live up to the hype.

Did a lot of your staff come from the same place? Some people came over from Quince and Cotogna. I've got Sarah Elliot, a former wine director at Commonwealth, Holly Wickham, who worked at Oliveto. Pretty much everyone on the floor has wine buying or sommelier experience in addition to being a server. So, I'm looking to switch the paradigm of one addled, strung out manager and a bunch of servers who have less responsibility. I want to give more people responsibilities and reward them for what they have to offer.

That's an extremely smart idea. Besides Vegas, any big hurdles in the opening week? No crazy health inspector stories. Jeff, who owned Heart before, left us in great shape with ADA compliance and everything. The biggest problem was that we ran out of money, which I think happens to everyone. I'm also tortured by the lighting. We're working on it. [Quince co-owner] Lindsey Tusk and her mother are masters with this, and you can tell by what they've done at Quince. I've learned a lot by watching them, although I can't say I've emulated it yet. We have a guy aesthetic, but we've got flowers. We've got textiles. We're trying to soften it up more.

What have people been responding to on the menu? Snacks are a big hit. Bill's pretzels and his pickled eggs: the spirit of those was to have something on the table quasi-instantly. It's working. The other thing about Bill is that he's a master soup guy. He did a ramp soup at the beginning. Now it's one with carrots. Bill has definitely exceeded my expectations, not just with his touch, but his acumen too. 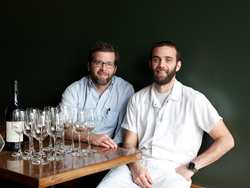 What have you been eating? I haven't been eating that much! I need to become that proprietor guy who feeds himself a good meal. I've tried everything on the menu and there's really only been one miss. It was an extruded fresh pasta that came out a little gummy. We are a tavern. We also serve Tartine bread which is awesome. Actually that's what I've been eating! We have draft beer and a masculine feel, but the food is rather polished. People who come in expecting a gastropub are going to be surprised.

You've got the 100 wine menu going, and everything is available by the half bottle. How's that been received? It's an idea I stole from John Slover who runs Bar Henry in the East Village of New York. It's great for everything except wine cost. If this wasn't a very personal project, it would be a bad idea. The whole thing is very dependent on having a wine savvy staff. People also need to come in and embrace the idea of ordering from bottles are already open. Good wine tastes better the day after it's opened.

What beers are on tap right now? We've got two from Moonlight: Death and Taxes and Twist of Fate; two from Craftsmen in Pasadena. Their 1903 is like a crisp, classic American lager: a sort of high end Budweiser. We're one of the few accounts to have these beers. We've also got some beers from Dying Vines out of Oakland.

What's still on the way? The website is a freaking disaster. I need to work on that. Luckily Bill is putting out some great grub and the wines and beers are flowing and people seem to be enjoying things. I've got a real wine list on the way too. In my mind, I have a lot of work to do to make it impeccable. It's harder to write a short list. A big, affordable reserve is still on the way too. Other interesting non-alcoholic beverages are in the works.

Who will supply those? I'm still deciding. Aperitifs are coming—sort of like what AQ did in the beginning. My boys at Bon Vivants might help. They're my pipeline to what's cool. Otherwise I'm like a suburban goof. [In-house beer sommelier] Sayre [Piotrkowski] is another line to cool for me. He can play some serious rap about beer. I basically just let the staff rip. It's exciting to watch it, and I see a big generational shift. When I started out, these restaurant jobs were more like mercenary positions. Now my staff is game for a wine trip on a day off. That's not something I'm used to.