1) The Mission: Here is a picture of the new chairs and tables at the in-the-works La Rondalla comeback, expected "by June at the latest." Looks like it's getting close to show time, yes? Still no updates from Betty and Luna Barrios, who are taking over. [EaterWire]

2) North Beach: Bask, the Basque restaurant coming to Colombus Ave., is planning a soft opening on Saturday at 7:30 p.m. [EaterWire]

3) Inner Richmond: TRB says The Cajun House coming to Clement Street is from *former* Craw Station owner Jon Xie. The "Asian-Cajun" menu will include crawfish and Dungeness crab seasoned with lemon-pepper, garlic butter, or cajun sauce. It might open tomorrow. [The Rich Blog]

4) Hayes Valley:Paul K closed on Sunday night, and Evan Rich of Rich Table tells Eater they should begin the build-out of the space this week. [EaterWire, ISSF]

5) Polk Gulch: Tablehopper catches a new sign for Playland Bar at the former Kimo's, and this might be a future cocktail lounge with DJs. [Hopper] 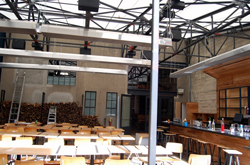 BERKELEY - Leading into the Friday opening, Berkeleyside has some new pictures of Comal, including the shot at left of its huge heated outdoor patio with its own bar and wine taps. [Berkeleyside]

6) Oakland: Sunhui Chang’s "new street-Korean experiment" Fusebox will be opening tomorrow at 11:30 a.m. for lunch only, according to Facebook. Most of menu is under $10. An outdoor patio with a soft-serve machine and a grill and dinner hours will be coming down the pike. [EBX, Facebook]